'Irish people largely see history as a detective story, not a tribal religion'

Culture review 2016: Misogyny, classism and racism were all still evident on our television screens 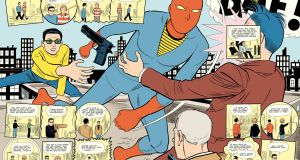 What were your cultural highlights for the year gone by? Daniel Clowes’s new comic, Patience, is a brilliant time-travelling rumination on love, bereavement and obsession. The first two volumes of Brian K Vaughan and Cliff Chiang’s Paper Girls document a gloriously weird adventure featuring four bicycling 1980s youngsters embroiled in a paranormal mystery (it’s even better than Netflix’s entertaining and similar Stranger Things). It also involves time travel. I also go into the Hugh Lane Gallery about once a month and look at the Eve of St Agnes by Harry Clarke, which calms me down and is, if you think about it, a form of time travel. I’m not sure why I am so obsessed with time travel.

Also, Happy Valley is still finding interesting ways to talk about evil, Bojack Horseman remains one of the most three-dimensional characters on television, Atlanta’s oddly-filtered poetic realism is revelatory, Z-Nation continues to be a delightful zombie-killing romp and the beautifully slow-moving miscarriage of justice story, Rectify, is still the best, most original drama on television.

What let you down? Western civic institutions. Human mortality. The lack of empathy. Misogyny. Classism. Racism. The internet. Also, the Gilmore Girls revival was a bit weak. What was the dominant plot twist of 2016? I think the fact that we’re still here has to be seen as a pleasant surprise. I’m currently banking that as a “win”. And I did not expect OJ to be acquitted on (the excellent) American Crime Story: The People v. OJ Simpson.

How did our centenary celebrations strike you? I was worried that, at one extreme, they would involve a jingoistic retreat into tribalism that would end with us all draped in Tricolours as we advanced on Wales or, on the other, that they would be akin to those Remember the 1990s shows in which Stuart Maconie would humorously recall James Connolly’s catchphrases (“That’s capitalism!” “It was like this when I got here!” “Shaddupayaface!”).

In the end, I enjoyed the celebrations a lot. I liked the fact that Irish people nowadays largely see history as an ideological melting pot and detective story, not a tribal religion. And I loved the collaborative aspects of the celebration – the opportunities for people all over the country to have their say via local history and drama and cultural groups.

I also quite liked the TV3’s counterfactual history drama, Trial of the Century, and very much enjoyed watching RTÉ’s surprisingly postmodern Hugh Leonard-penned 1966 drama Insurrection. However, I probably learned most from the Rubberbandits’ Guide to 1916 and from watching the children of St Patrick’s National School in Ringsendre-enacting moving scenes from the GPO while chuckling.

What will be your cultural resolution for 2016? Stay off the internet as much as possible. I’m going to read mainly from printed paper, which is a much better technology for the transmission and retention of information and culture than the fizzing hell-screens that burn my eyeballs, take my data and rob me of empathy and sleep.