Drinks company Pepsi have released their latest ad campaign, featuring Kendall Jenner, which has been labeled as 'tone deaf' by critics 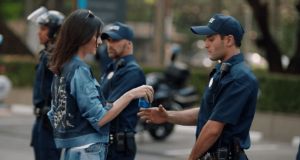 This is Adland, and Kendall Jenner can do wondrous things.

Who knew that all it would take to achieve world peace would be a member of the Kardashian family and a carbonated beverage?

It’s an unlikely combination that the copywriters of the latest Pepsi advert thought might pass for a decent campaign. The truth is that it’s pretentious, overproduced celluloid mulch.

We know that things are afoot socially because, em, a man plays a cello and a woman struggled with finishing her photography project. * shrugs *

As the multicultural crowd cruises past, Jenner is modelling her socks off. Job done on her latest campaign, she wipes her makeup off and rips off her platinum wig, as she is Officially Off Duty. Jenner joins the protest and, perhaps the crowd are so thrilled to have a genuine reality star in their midst, but this becomes the sort of protest that could pass easily for a summertime block party. It’s unclear as to what they might be protesting, but it could very easily be the closure of a branch of Abercrombie & Fitch. The vibe is decidedly unvexed. Festive, even. There is nary a pepper spray, water cannon, nor pink pussy hat in sight. A guard watches, unmoved, as Jenner shimmies and dances among her fellow protestors. This protesting against any and all isms looks like a right lark, but it’s thirsty work, too. One pensive pout, and Jenner decides to proffer a refreshing can of Pepsi to a protest officer.

It’s likely a nod to a real life instance in which Louisiana native Ieshia Evans stood calmly in the face of police protestors during a Black Lives Matter protest. Instead of quenching anyone’s thirst with a zesty can of fizz, Evans was promptly arrested. But this is Adland, and Kendall Jenner can do wondrous things. Barriers thusly broken down with the proffered beverage, all is right in the world and the party goes on.

Getting inside the minds of whoever came up with this concept is not a place I’d necessarily like to be, but I’ll wager the boardroom conversation went a little something like this:

Woke up to learn @Pepsi and a Kardashian achieved world peace. Apparently, I died in my sleep. I would like to buy the world a @CocaCola

Of course, in Ireland, our soft drinks were radicalised as far back as the 80s. Get in line #PEPSI https://t.co/UhEDirDVS0

If this #Pepsi ad is the choice of a new generation, Im gonna need that generation to turn in its badge.

Executive A: Protests are really huge right now. We’re all about surfing the Zeitgeist, right? Have you seen how well political protests do on Twitter?

Executive C: Won’t that be a little strange, though? Hiring a woman whose family are the very paragon of vapidity and privilege to front a campaign that doffs its cap to Black Lives Matter?

Executive A: No way. Salience is the holy grail in this business. Trust me, this ad will become a great symbol of unity.

In any case, Twitter wasn’t long in coming up with ripostes.

On the surface of it, the Twitter backlash looks like the doings of the Permanently Outraged Brigade, who chuck their toys out of the pram at the first hint of dissent or misstep.

But there’s something about Pepsi’s chase of relevance and their play for people’s emotions, at a time when they’re running dizzyingly high, that is tedious.

It’s lovely to think that a gesture as simple as this could cure the world’s ills, but it’s quite something for Pepsi to shoehorn themselves into the conversation like this. As anyone within shouting distance of most protests already knows, the atmosphere at most protests is tense, urgent and apprehensive. People are marching to make a point and to let their dissenting voices be heard, not have an outdoor silent disco. Add America’s fraught political and social climate - bubbling with racial, class and gender frictions – into the mix, and Jenner’s crisp white T-shirt would last five seconds. It’s precisely this mercurial roiling social climate that has made Pepsi’s ad, striving as it does to be so ethical and woke, so embarrassingly out of touch with the Zeitgeist. They aimed for current and thought provoking, and missed it by a good country mile. Sometimes the ideas that seem good on paper should remain just that.