Album containing photograph set to fetch up to €8,000 at auction in October 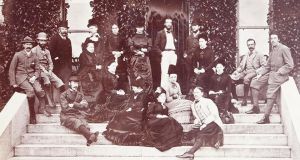 A photograph dating from October 1878 which shows Oscar Wilde at extreme right, then unknown and aged 23, during a house party at Ashford Castle in Co Mayo.

A previously unpublished photograph of Oscar Wilde as a young man has come to light. The photograph shows Wilde, then unknown and aged 23, during a house party at Ashford Castle in Co Mayo in October 1878.

Wilde, dressed in tweed and wearing plus-fours – breeches worn just below knee-length – is seen on the extreme right of the group and is seated on the balustrading on the front steps of the house.

Ashford Castle, now a luxury hotel, was then the home of Lord and Lady Ardilaun of the Guinness dynasty.

Auctioneer Kieran O’Boyle said the “superb photograph is part of a fascinating album depicting the Guinness’s social life and has never been published, as far as we are aware”. It has been consigned to auction by an unnamed vendor “from the extended family of Lady Ardilaun”.

The photograph was taken during what is believed to have been Oscar Wilde’s last visit to Co Mayo.

He had just completed his university studies at Oxford where he had gone after graduating from Trinity College, Dublin.

Shortly afterwards he moved to London, where he became the most famous playwright of the late Victorian era.

His career ended abruptly, and in disgrace, following a series of widely publicised court cases. In 1895, Wilde was convicted of “gross indecency” – at a time when homosexual acts were outlawed – and sentenced to two years’ hard labour.

He later moved to Paris where he died in a hotel room aged 46 and was buried at Père Lachaise Cemetery.

Lord and Lady Ardilaun – 19th century Ireland’s wealthiest couple – had no children and were generous philanthropists whose most notable gift to the nation was St Stephen’s Green. Their Dublin home, St Anne’s in Raheny, was destroyed by fire in 1943, and the grounds are now a public park.