The Great War and Irish poets 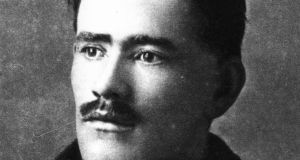 As January 1914 dawned, Europe had experienced 100 years of comparative peace since the Battle of Waterloo. During that time, technological developments, such as the train, the telephone and the steamship, had made the world a smaller place.

The great economist JM Keynes created the image of a Londoner at the beginning of 1914 “sipping his morning tea in bed” and ordering “the various products of the whole earth” to be delivered to his house – much as we order goods from various websites today – and looking upon this as “normal, certain and permanent, except in the direction of further improvement”.

Here in Ireland, 1914 was to be the year when Home Rule became a reality. One young man who had a particular interest in that prospect was the politician, barrister, economist, writer and poet Tom Kettle, one of the foremost intellectuals of his generation. He was a charismatic character and one who knew him referred to his “amazingly warm and commanding personality”.

But a combination of a nervous disorder and alcoholism had caused him to have a breakdown in 1913 and his doctors sent him to a private hospital in Kent for treatment. From there he wrote at the very end of 1913 to thank them and to state: “I believe that I am cured. You said that this experience would change my whole view of life. It has in the deepest sense. The world that I am coming back to will be very different from that I left. This humiliation was necessary to me. There has been too little of it in my life, but the arrears are being paid to the last coin.”

As 1914 dawned, Tom Kettle looked to the future with optimism. Another who must have done likewise was the young Meath poet, Francis Ledwidge.

This son of a Boyne Valley farm worker, who had left school at only 13 and who had worked at various manual-labouring jobs since then, came from a very different background to Kettle.

But he had had some success getting poems published in local newspapers and he had been befriended by Lord Dunsany of Dunsany Castle near Tara, himself a writer and dramatist. He could see the talent the young labourer from Slane possessed: “I was astonished by the brilliance of that eye that had looked at the fields of Meath and seen there all the simple birds and flowers, with a vividness that made those pages like a magnifying glass, through which one looked at familiar things seen thus for the first time. I wrote to him greeting him as a true poet, which indeed he was . . .”

Dunsany furthered Ledwidge’s education, helped his poems to reach a wider audience and introduced him to other writers, such as AE, Katherine Tynan, Thomas MacDonagh and James Stephens.

Ledwidge was also a young man in love as 1914 dawned, the object of his affection being Ellie Vaughey, the younger sister of his friend Paddy. “I wait the calling of the orchard maid, / Inly I feel that she will come in blue, / With yellow on her hair, and two curls strayed / Out of her comb’s loose stocks, and I shall steal / Behind and lay my hands upon her eyes.”

Two young English poets found themselves abroad in January 1914. They were from varied backgrounds. One, Wilfred Owen, came from a relatively humble background, probably a bit wealthier than Francis Ledwidge’s, while the other, Rupert Brooke, came from a background similarly secure and comfortable to that of Tom Kettle.

Owen, from Shropshire, had been writing poetry for some years but had not yet been published. He was working as a private tutor in the Berlitz School of Languages in Bordeaux in January 1914, teaching English and French. He had met the older French poet, Laurent Tailhade, and was sharpening his poetic gift.

Brooke, from Rugby in Warwickshire, had left England in 1912 following a nervous breakdown brought on by the end of a relationship and the feeling of having been betrayed by a friend.

He had already become a successful poet, having written what was to be his most popular piece, The Old Vicarage, Grantchester: “And laughs the immortal river still / Under the mill, under the mill? / . . . Stands the Church clock at ten to three / And is there honey still for tea?”

He was in Tahiti at the beginning of 1914, experiencing what was probably the most stable and happiest part of this life.

Within a few short months, the Great War began, a cataclysm that was to engulf all four young poets and bring their optimism, hopes and aspirations to naught.

Precious time with a parent during Covid-19
9