The Dream Team from Sneem

An Irishman’s Diary about a famous sporting family 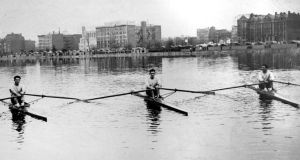 The triumphant Caseys in their single sculls (from left): Tom, Jim and Steve on the Charles River, Boston, Massachusetts. From: The Legendary Casey Brothers, published by The Collins Press, 2013.

Thirty years ago this summer, the Sneem Regatta in Kerry hosted a final reunion on home water of what was arguably the greatest Irish sporting family of all time.

They were called the Casey brothers. There were seven of them: Steve, Paddy, Jack, Jim, Mick, Tom, and Dan. And to suggest they were Ireland’s greatest sporting siblings may, if anything, be an understatement. They were also once dubbed, not without justification, “the toughest family on earth”.

Sheer size was one of their main attributes, and it was hereditary on both sides. Their father was “Big Mick” Casey, a bare-knuckle boxer who in youth had sparred with John L Sullivan. Their mother was Brigid Sullivan, from a family known around Sneem as “the Mountains”.

But the seven sons had finesse as well as physique. The 1983 reunion (of the five who could still travel) was in a rowing boat: the stage on which they most excelled as a group. They were among the greatest oarsmen of their generation, although that sport was also the source of their greatest disappointment, of which more later.

As a collective, they also excelled in tug-of-war. But it was in the individual discipline of wrestling, probably, that they reached their highest level. And the brother who scaled the final summit was Steve, or as he was known in a sport where nicknames were obligatory, “Crusher Casey”.

For several years from the late 1930s, Steve Casey – 6ft 4in and 17 stone – held the most authentic version of the world heavyweight wrestling championship, thanks partly to his trademark move, the “Killarney flip”.

Among his rivals, incidentally, was a fellow countryman, Danno O’Mahoney, whose signature was the “Irish whip”. Their first meeting was a draw. But in a rematch-to-the-finish, the “flip” outmanoeuvred the “whip”, albeit after an epic 18 rounds and 97 minutes.

Not content with wrestling supremacy, however, Casey was also a formidable boxer. He beat the US champion, then challenged Joe Louis for the world title. When Louis didn’t pick up the gauntlet, the New York Post taunted: “Even the greatest run scared of the Sneem Machine”.

“Crusher” was not the only Casey to excel at wrestling. His immediately-younger brother Paddy was a three-time All-Ireland champion, probably destined for greater things when he broke his back during a bout in 1938.

He won that fight anyway, but the injury curtailed further ambitions, and he was better known in later years for operating a string of Irish clubs in London: the Glocamorra, the Shamrock, and the Inisfree. Another Casey, Mick, fought 200 wrestling bouts, despite being the only brother never to leave Sneem.

But back to rowing, the sport in which the family first established their legend in the early 1930s. A measure of their collective talents was when five of them combined to win the Lakes of Killarney Salters Cup, in perpetuity, somewhat to the chagrin of the organisers.

The rule was that if you won three years running, the trophy was yours. After they triumphed in 1930 and 1931, however, there was no 1932 competition. So when they won again in 1933, they were first told that the victories had to be consecutive. Not surprisingly, the brothers won the argument and kept the cup, despite the organisers offering £60 to buy it back.

By 1936, now in London, they had added an All-England title to their CVs and would have been among the favourites for the Berlin Olympics. The Caseys were not alone in thinking they could win all six competitions they targeted there. Unfortunately, news of their professional activities in the fight sports earned a late disqualification.

Four years afterwards, three of the brothers went some way to proving their point, when they challenged all-comers to a single skulls race on Boston’s Charles River. Only one of America’s best rowers, Russell Codman, was brave enough to accept. Watched by a quarter-million spectators, he was beaten into fourth place.

The family’s remarkable story was told in a 1991 book by Jim Hudson, a Nasa engineer and friend of Jim Casey, then living in Texas. Sad to say, it was published only in the US and sank without trace.

Since when, the last of the siblings and Hudson himself have all died. But Jim’s widow Myrtle was determined the story would not die with them. She prevailed on Irish publishers to help. And now, happily, The Legendary Casey Brothers has been revived by Collins Press and is heading for a bookshop near you.