Young and militant, women were some of the most energetic activists of the Lockout, Nell Regan 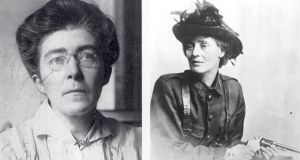 “In their 17 weeks’ fight no section had shown more pluck and endurance and solidarity than the women workers.” – James Larkin, January 1914, oration at funeral of Alice Brady

As strikers, organisers, relief workers and activists, large numbers of woman played a central role in the Lockout and many were imprisoned for that role. Until relatively recently, this has been represented by the stirring image of Constance Markievicz in the soup kitchens of Liberty Hall and a strikers’ wife receiving relief – both only a part of this complex story.

On August 26th, 1913, over 700 women from industries such as packing, confectionery and matchmaking were organised into the Irish Women Workers Union. Throughout the six months of the Lockout, all of its members remained out on strike.

Poorly paid and often working in appalling conditions, their militancy was noted by the police in late September when thousands of strikers marched from Croyden Park. As tensions rose in the city “ . . . a menacing attitude . . . was recorded and it was added that the large number of IWWU members were . . . no less vehement than their male colleagues”. Altogether, 41 women and girls were imprisoned for strike-related offences.

Among the most militant members were the Jacobs Biscuit factory workers, nearly 500 strong. The company declared a complete lockout after a majority of these women failed to turn up for work on Monday, September 1st and those that did refused to remove their union badges. Among these was Rosie Hackett, a 21-year-old messenger who had helped Delia Larkin, general secretary, to first organise in Jacobs.

Hackett is one of the few named women strikers in the Lockout, in part due to her later involvement in 1916 and the IWWU. She has recently become well known, as her name is one of five being considered for the new Marlborough Street Luas bridge. In age and temperament she was typical of these young, militant women.

By February 1914, of the 5,000 workers still out on strike, 500 were IWWU members, mainly from Jacobs. Most would not get their jobs back and some, including Hackett, could only find work in the IWWU co-op on Eden Quay, where they would be at the centre of Citizen Army preparations for the Rising in which they fought.

Symbol of bravery
The young IWWU member, Alice Brady, who died from injuries in disturbances, became a symbol for the bravery and resilience of women workers. The 16 -year-old, shot by a strike breaker delivering coal, died on January 1st from tetanus. Her funeral was a union show of strength and demonstration of public anger.

Thousands followed the cortege from her home on Luke Street to Glasnevin Cemetery, including Delia and James Larkin, James Connolly and Constance Markievicz. The orations at her graveside were covered widely. Connolly proclaimed that “every scab and every employer of scab labour in Dublin is morally responsible for the young girl we have just buried”.

Leading the women throughout the lockout was their general secretary Delia Larkin, sister of Jim Larkin, also born in Liverpool, in 1878. “All we ask for is just shorter hours, better pay than the scandalous limit now existing and conditions of labour befitting a human being”, she had written on the founding of the IWWU in September 1911. However, she herself was sceptical of the venture’s chances of success.

She was impressed by the enthusiasm of the women workers and had recruited over 1,000 members by the following year. She played a pivotal role, not only with the IWWU but standing in for her brother, often imprisoned or in Britain, as well as co-ordinating the relief work in Liberty Hall where up to 3,000 meals a day were provided. A visitor commented: “the outward fort of Liberty Hall and the inner fort of high resolve and loyalty . . . are being held by his sister and comrade Delia Larkin . . . moving outwardly serene among the girls and men it is her daily work to organise” .

Just as the prominent male figures in the cultural and nationalist movement were galvanised by the Lockout, so too were the women of the progressive nationalist and suffrage movements, some of whom had already begun to engage in labour politics.

Many of these would become leading trade unionists over the next 50 years. Women from the radical nationalist women’s organisation Inghinidhe na hÉireann, spoke at public meetings during the Lockout, took part in the relief effort and more broadly influenced the course of events.

Helena Molony had been calling for women workers to organise since 1909 and was political mentor to Constance Markievicz. The latter spoke at the founding of the IWWU, linking the cause of labour to that of Ireland and suffrage saying, to great cheers and laughter, that the IWWU “will also be a great means of helping you to get votes and thus make men of you all”.

According to Molony, she and Markievicz persuaded James Larkin to defy the police ban on a planned gathering on Bloody Sunday. Using Molony’s stage make-up (she was by profession an actress), they and Nellie Gifford transformed him into an elderly clergyman and accompanied him to the Imperial Hotel from where he addressed the crowds. They then helped distribute food in Liberty Hall. Molony would later become general secretary of the IWWU and Markievicz its president.

Suffragette support
Women from the suffrage movement also became involved in the relief and propaganda efforts on behalf of the workers, in particular the Irish Womens’ Franchise League, led by Frank and Hanna Sheehy Skeffington. They encouraged members to recall protection provided by Connolly and ITGWU members when suffrage meetings were under attack and moved weekly meetings to Beresford Place beside Liberty Hall.

Another suffragist, Louie Bennett, described how she “crept like a culprit into Liberty Hall to see Madame Markievicz in a big overall, with sleeves rolled up, presiding over a cauldron of stew, surrounded by a crowd of gaunt women and children carrying bowls and cans”. Her long career as a trade unionist was prompted by the “prickings of conscience so many of us felt after the 1913 strike”.

The provision of relief schemes for a starving population exacerbated the political, sectarian and social divides in the city, most clearly in the case of the “Kiddies scheme”. Dora Montefiore’s controversial plan to send children of locked-out workers to be hosted by sympathisers in England got a mixed response. Maud Gonne wrote a scathing letter in opposition, Josephine Plunkett proposed alternative schemes, while Markievicz posted bail for the English women (the issue led to Montefiore’s arrest on a kidnapping charge).

As the winter intensified the hardship, women of all political persuasions became involved in relief campaigns. Progressive women tended to gravitate to Liberty Hall, where “ . . . cooking, cleaning and attendance is performed by a number of locked-out women and girls as well as by the daughters of locked-out workers”.

Inghindhe na hÉireann, directed by Maud Gonne and Helen Laird, sought, against opposition, to extend the free school dinners scheme while many suffragists campaigned for support (despite some trade union opposition) for the Dublin Children’s Distress Fund set up by Marie Sherlock, the Lord Mayor’s wife. There were also schemes set up by Lady Aberdeen and various religious organisations through ‘ladies’ guilds’ as well as St Vincent de Paul to help the “deserving poor”.

The Lockout had repercussions, both social and political, throughout Irish society. For women it could be argued its most significant legacy was the continuation of the IWWU and the increasing activist engagement of working women with the labour movement.

After 1915 the union would be central to Citizen Army preparations for the 1916 Rising and many of its members saw active service. Although personalities changed amid the bitterness of the Lockout aftermath, the union had and continued to uphold Delia Larkin’s words of 1912: “We are fighting for a principle and for the right of working women to combine.”

Nell Regan is a freelance writer, poet and educator. Her biography of Helena Molony is published in Female Activists: Irish Women and Change 1900 to 1960 (Ed Mary Cullen and Maria Luddy)