Opinion: ‘A republic includes all of the experiences and all of the vulnerabilities of all of its citizens’ – Michael D Higgins 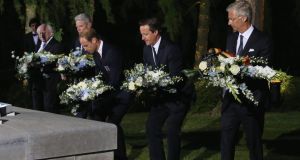 ‘President Higgins was escorted to the graves of a number of Irish soldiers and later laid at the obelisk a floral tribute with the Irish Tricolour entwined to commemorate all who are buried there.’ Above, from left, President Higgins; the president of Germany Joachim Guack; the Duke of Cambridge; British prime minister David Cameron and King Philippe of Belgium at a ceremony at Mons, commemorating the 100th anniversary of the start of the first World War. Photograph: Gareth Fuller/PA

The presence of President Higgins at ceremonies in Liege and Mons this week to mark the beginning of the first World War was an appropriate recognition by this State of the sacrifice made by the tens of thousands of Irish men who died in that war.

More importantly, it represented a reaching out to all of the traditions on the island of Ireland and the various varieties of Irishness that go to make up this country. For far too long a narrow, constricting definition of Irishness stifled an inclusive remembrance of the past, with those who didn’t fit that definition feeling obliged to remain silent about their family histories and in some cases even deny them.

Thankfully that day has passed, although some letters to The Irish Times this week show that there are still people who cling to a warped version of national identity that defines itself purely by hostility to our nearest neighbour.

The President, who has always expressed pride in his family’s republican tradition, summed up why it was important to commemorate the Irish dead of the first World War. “My definition of a republic is a republic that includes all of the experiences and all of the vulnerabilities of all of its citizens.”

The Irish involvement in the first World War reflected the complex and often contradictory currents that led to independence. Those currents were reflected in individual families as well as across society. One instance was the Kent family of Clonliffe Road in Dublin.

Executed after Rising James Kent was an Irish-speaking RIC constable who passed on his love of the language to his son Edward. Edward became politically active, adopted the Irish form of his name and as Eamon Ceannt was one of the seven signatories of the 1916 Proclamation. He was executed after the Rising. His older brother William retained his original surname and joined the British army as a regular soldier during the Boer War.

Sgt Maj William Kent of the Royal Dublin Fusiliers later served in the first World War and was killed at Arras in 1917.

The complexity of the Kent family history reflects that of the country but, because of the way events turned out, it was for far too long only possible to commemorate one strand of our history.

It is only a little over two decades ago that then taoiseach Charles Haughey prevented president Patrick Hillery from accepting an invitation to attend the annual remembrance ceremony organised by the British Legion at St Patrick’s Cathedral.

Since then the atmosphere has been transformed with, presidents Robinson and McAleese playing a very important role in bringing that about.

Irish people now feel comfortable about honouring their relatives who died in the first World War. As the centenary of the war approached, the graves of many of the Irish dead have been visited by relatives for the first time in almost a century.

One touching individual story, which reflects the experience of many, was of a man who was the first of his family to visit his uncle’s grave in Flanders. An accomplished musician , he brought his clarinet with him and at his uncle’s grave played Amhrán na bhFiann in his honour.

That theme was reflected during the ceremony at Mons last Monday. President Higgins was escorted to the graves of a number of Irish soldiers and later laid a floral tribute at the obelisk with the Irish Tricolour entwined to commemorate all who are buried there.

The UK authorities ensured the Irish involvement in the war was recognised. Prince Harry read a letter from Private Michael Lennon of the Dublin Fusiliers sent to his brother the day before he died at Gallipoli. The event was inclusive, with the German dead as well as those who fought in British uniform remembered.

German president Joachim Gauck had earlier in the day made an extraordinary speech at the more formal commemoration at Liege in which he apologised for his country’s role in the war. “This war began in western Europe with Germany’s completely unjustifiable invasion of neutral Belgium. The invasion only followed military logic, and it thus became apparent on the very first day of the war that treaties were worthless and that the standards of civilisation had been rendered null and void.”

There is still intense debate about the cause of the war. British prime minister David Cameron defended the decision of his predecessor to go to war 100 years ago saying it was vital to defend democracy and protect neutral Belgium.

took a different view, saying the war was futile. Regardless of differing views about its cause, the key thing is that it should be possible to remember and respect those who died.

About 150,000 or so Irish men went to the war and close to 50,000 of them died, according to the latest research. Of those who fought, almost 24,000 came from Redmond’s National Volunteers, and were probably motivated by the desire to vindicate the rights of small nations, particularly their own.

The majority, however, went for a variety of reasons. Poverty was one of them. Regardless of why they went to war, the presence of the Irish President at the commemoration ceremonies this week paid all of them the respect they deserved.