'Our time of threatened calamity ...'

Edward Carson signing the Solemn Oath of the Covenant

September 28th, 1912: In the Protestant churches throughout Ulster they sang “O God, our help in ages past” in invocation of divine support for the Covenant of resistance to Home Rule. Factories and shipyards closed to allow workers to participate in the hundreds of signing ceremonies. One man signed in his own blood, Frederick Hugh Crawford; he would later become the Ulster Volunteers’ Director of Ordnance. And, all told, 234,046 women, and 237,368 men signed their respective pledges.

In Dublin the Covenant was signed by 2,000 men who could prove that they were born in Ulster. And it was also signed in major cities in England and Scotland. At Belfast City Hall 2,500 members of Unionist Clubs of Ireland guarded the grounds. Carson signed first, followed by Lord Londonderry, representatives of the Protestant churches, and then James Craig.

Martin Ross (of Somerville and Ross fame) wrote “Four at a time the men stooped and and fixed their signatures and were quickly replaced by the next batch. Down the street in a market house the women were signing, women who had come in flagged motors, and on bicycles and on foot . . . 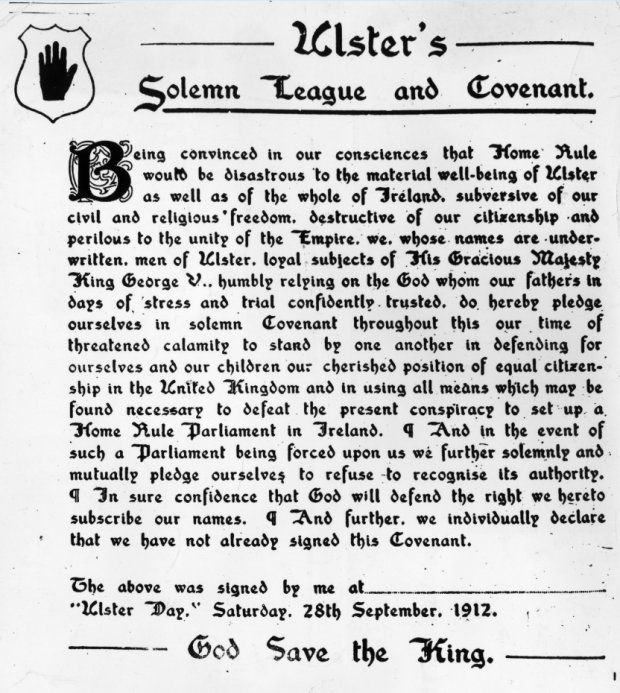 “In the City Hall in Belfast the people were signing at the rate of about a 150 a minute; here there was no hypnotic force of dense masses, no whirlwind of emotion, only the unadorned and individual action of those who had left their fields, and taken their lives and liberties in their hands laying them forth in the open sunshine as the measure of their resolve.”

Fully searchable digital versions of the men’s and women’s Covenants are available on the Northern Ireland Public Record Office site at http://www.proni.gov.uk