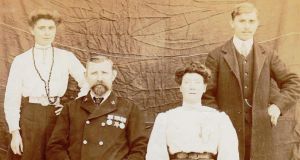 (From left to right) Frances, daughter of Jeremiah Hennessy snr (seated), his second wife Mary Josephine, and son Jeremiah jnr, who was involved in the Howth gunrunning.

As both an Irish Volunteer and the son of an officer in the British navy, Jeremiah Hennessy may never have suspected his involvement in the Howth gunrunning would result in family division.

This month, to mark the anniversary of the landing of weapons by the ketch Asgard in north Co Dublin, Hennessy’s family have agreed to donate letters between father and son to the National Museum.

In stark terms they describe his participation in the events at Howth of July 27th, 1914, and his consequent estrangement from his father. It is perhaps an all too familiar tale of a family severed by opposing loyalties in the years preceding the Civil War and creation of the Irish Free State.

At the time the Howth gunrunning would have been considered by many as “madness”, according to historian Diarmaid Ferriter, a view echoed in the disowning words of Jeremiah Hennessy Snr, who told his son he was “forbidden” from returning home as a result.

The story is played out in correspondence to be displayed next weekend at an exhibition due to be attended by President Michael D Higgins. ‘

Writing to his father and stepmother shortly after the gunrunning, Hennessy Jnr informed them he was a member of the corps of Volunteers “and yesterday morning we assembled for parade in the ordinary way but of course in larger numbers and marched to Howth, a 9-mile march and were drilling there when the lugger came into the pier.

“The coast guards and police tried to stop us but we were armed with long batons and the sight of those was persuasion enough to keep them at a civil distance.

“Of course the paper exaggerated a lot more than really took place. Nevertheless, we were held up by the military, who met us with fixed bayonets and a bit of a fight took place, still we came off alright and only lost 20 rifles.”

He explained that further trouble was anticipated from the police searching for the arms which were “partly hidden”.

“It was great excitement, the bayonet charge, some shots were fired but the majority of the Vols had no ammunition otherwise more damage would have been done to the soldiers,” he wrote.

“I believe they let themselves out of control in Bachelors Walk, and made a very cowardly attack on a defenceless crowd of women and children...I don’t expect I will go home next week as anticipated.”

In the end that homecoming never took place. Writing in response, Hennessy Snr told his son he was surprised to hear of his Volunteers membership as his father wore the uniform of a coast guard officer.

“I forbid you to come to my house again so I must say fair well, son,” he wrote.

Last week Betty Craven met with Lar Joye, curator of Irish military history at the National Museum in Dublin, where she presented the letters having come to realise their importance following their discovery in a family album about five years ago.

They will now be kept in the State archive, and likely feature in a forthcoming 2016 centenary exhibition.

“He couldn’t understand this young fella going off and doing this,” she said of her great-grandfather, who died in October 1915 before reconciliation was possible.

Hennessy Snr joined the British navy in 1877 and moved to the coast guard before being recalled to train sailors for the first World War.

Ferriter explained that such family division was common in the era, and the gunrunning would not have attracted widespread public support.

“It was not something that was in any way part of the main populous movement; quite the opposite.

“One of the themes during the revolution was the tension between the older generation and the younger generation.

“The older had been brought up in a much more moderate nationalist culture.”

Betty Craven grew up around the corner from her grandfather, a carpenter, in Marino, Dublin. The pair were close before his death when she was 18.

“He lost his mother at the age of four and his father was a widower so by his 20s he had lost both his parents,” she said.

“I am very proud of him. I would love to think that we are honouring him with something that was almost forgotten.”

Copies of the letters and a timeline of the gunrunning itself will be presented on board one of the original Dublin trams – restored partly by Hennessy Jnr’s great grandson Feargal – at Howth pier next Sunday.