It’s St Brigid’s Day. So who was she?

From the Irish Times archive: The most merchandised of Irish saints, her head is, allegedly, in a church near Lisbon 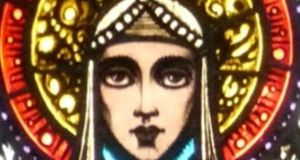 Whatever about that, for many centuries they observed four focal points in the pastoral year, each roughly equidistant from a solstice and an equinox, Imbolc, Bealtaine, Lughnasa and Samhain.

The latter three are remembered in the Irish names for May, August and November but Imbolc, the celebration of ewes giving birth and feeding their lambs was christianised as Lá Fhéile Brigide, the feast day of Brigid on February 1st.

By the time of the Norman invasion, more “lives” had been written about Brigid (Bridget in English, Bríd in modern Irish) than about any other Irish saint but they were mainly hagiographies intended to promote her reputation rather than biographies in the modern sense.

A cloth, said to be Brigid's mantle, is in the cathedral of Bruges in Belgium and her head is, allegedly, in a church near Lisbon

According to one “life”, when Mel, the bishop of Ardagh, was professing her, he became so intoxicated with the grace of God that he mistakenly read the wrong text from his book and consecrated her with episcopal orders.

If he did, and even if a fiery column then arose from her head to signify divine approval, as also reported, she didn’t use her new powers.

Instead, she had a hermit named Conleth consecrated so that “nothing of the sacerdotal order would be wanting” in her monastery.

Some of the more fanciful stories about the saint may have been associated with an earlier Brigid, the Celtic goddess of agriculture and poetry, like the tale that she hung her cloak to dry on a sunbeam.

Others have a Christian flavour. For example, when Conleth brought a set of costly vestments from the Continent, she confiscated them and cut them up to give strips of cloth to the poor.

She also cured lepers but she could equally use her supernatural powers to punish as when she inflicted a relapse on one of them after he refused to wash another sufferer.

What we can say, with reasonable certainty is that, by 650, there was a widespread memory in Ireland of an abbess named Brigid, the daughter of a petty king and a slave, a powerful personality with a reputation for holiness who had established a large religious foundation in modern Kildare before her death around 525.

What is indubitable is that her cult was carried to many parts of Europe by travelling monks and that her feast was celebrated in Germany in the 8th century.

In 835, the Vikings destroyed her shrine in Kildare but, according to tradition, her remains had already been taken to Co Down and buried, supposedly, with Patrick and Colm Cille.

Brigid was the most merchandised of the Irish saints. She was associated with the linnet, the skylark and the oystercatcher and regarded as a protector of livestock.

In the Scottish Highlands, her emblems were the dandelion and the lamb. In Strasburg, the canons of St Peter’s sold St Brigid’s wine.

A cloth, said to be her mantle, is in the cathedral of Bruges in Belgium and her head is, allegedly, in a church near Lisbon.

At home, crosses made from rushes were given her name and people in some parts of the country carried small dolls called brídeogs from house to house on February 1st as they sought alms.

She also gave her name to more than 40 townlands and numerous holy wells and Maol Bríde (McBride), the devotee or servant of Brigid, became a common surname.

Surprisingly, few women named Brigid, or Bridget, feature in Irish history. Exceptions include Bridget Fitzgerald, the wife of Rory O’Donnell, the earl of Tyrconnell, who was left behind with their son when he sailed from Rathmullan in 1607; Bridget Cromwell, a daughter of Oliver, a man who had no known connection with Ireland until he visited in 1649; and the 19th-century Clare wise woman Biddy Early.

Information about the frequency of first names in past times is sparse but about 7 per cent of the women, mainly from the south and west, who sailed to New York in 1846 were called Bridget.

Two generations later, according to the census of 1911, Bridget or one of its variants, including Biddy, Bridie and Bridgie, was also the name of about 7per cent of women in the island as a whole.

Nowadays, Bridget’s name is much less popular but her feast is still celebrated, in part because it coincides with the time when, if the weather is good, we begin to tell one another that there’s a touch of spring in the air, even if the meteorologists insist that it doesn’t begin until March 1st.