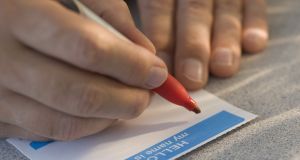 Many surnames have been around for centuries. Photograph: Tetra Images/Getty

“What’s in a name?” Juliet asked as she and Romeo tried to puzzle their way around the troubling problem of their warring families. Well, plenty, the most detailed investigation into surnames in Ireland and the UK has found.

A team of researchers has spent four years studying the meanings and origins of almost 50,000 surnames, from the most common to the highly obscure.

Some names have been around for many centuries while other more recent arrivals are explained for the first time in the work, the Oxford Dictionary of Family Names in Britain and Ireland, which is published on Thursday.

There are dozens of obvious ones linked to occupations, such as Smith (a name carried by more than half a million Irish and British people), or to place names, such as Dublin, Leicester, Sutton or Green. There are also many that began life as nicknames, such as Longbones and Goodfellow.

But there are also some that could not be guessed at, such as Campbell. The surname used to be represented in Latin documents as de campo bello (of the beautiful field). Actually, the new dictionary spells out that it comes from the Gaelic for crooked mouth.

Richard Coates, professor of linguistics at the University of Western England (UWE), said there was great interest in the origins of family names. (His own may stem from one of the numerous places called Coates, or from the Old English cot, for cottage or workman’s hut.)

“Our research uses the most up-to-date evidence and techniques in order to create a more detailed and accurate resource than those currently available,” he said.

About half of the 20,000 most common names are locative, meaning they come from places; a quarter are relationship names, such as Dawson; and a fifth are nicknames.

About per cent are occupational, including less familiar ones such as Beadle (church official), Rutter (musician), and Baxter (baker). The nicknames are not always straightforward: the early Shorts may have earned theirs because they were tall.

The research has been funded by the Arts and Humanities Research Council (AHRC), led by a team at UWE in Bristol and published by Oxford University Press. In paper form it is four hefty volumes.

On the team were historical linguists, medieval historians, lexicographers and expert advisers on Irish, Scottish, Welsh and recent immigrant names. They analysed records from published and unpublished sources dating from the 11th to the 19th century to pinpoint new and detailed explanations for names. They looked at names that could be found in just about every corner of Ireland and the UK, and ones attached to as few as 100 people.

Each entry includes the frequencies of the name at the time of the 1881 and 2011 censuses, its main location in Ireland and Britain, its language or culture of origin, and, wherever possible, an explanation supported by historical evidence for the name. Much of this evidence is new, drawn from previously untapped medieval and modern sources such as tax records, church registers and census returns.

The study concludes that nearly 40,000 family names are native to Ireland and Britain, while the remainder reflect the diverse languages and cultures of immigrants who have settled since the 16th century, including French Huguenot, Dutch, Jewish, Indian, Arabic, Korean, Japanese, Chinese and African arrivals.

About 8,000 names are explained for the first time, the researchers say, including Li. It is one of the commonest Chinese surnames in Ireland and the UK, with more than 9,000 bearers in 2011, not counting those who spell it Lee. The name has at least six different origins in a range of Chinese dialects, including the meanings plum, chestnut, black, fortunate and strict.

The work corrects wrong previous explanations. Past dictionaries, for instances, have said Maude comes from the Middle English name Maud. But the researchers have concluded it is linked to the town of Mold, in north Wales.

Some are esoteric. Peter McClure, a professor and the dictionary’s chief etymologist, said: “The modern appearance of a name is not always a good guide to its origin. For example, Levison looks like a Jewish name meaning son of Levi, and sometimes it is, but in north-east England it is a colloquial development of the Scottish locative surname Livingstone.

It does not end here. AHRC has awarded UWE Bristol a further grant to continue the project so that another 15,000 surnames with just 20 current bearers or more can be included. – (Guardian Service)

The Oxford Dictionary of Family Names in Britain and Ireland is published in hardback print format (four volumes), ebook format and for library subscription online via Oxford Reference for a UK retail price of £400.

The dictionary will be accessible for free via public libraries that purchase the resource. Members of the public can request that their library purchase the dictionary by completing a form at https://global.oup.com/academic/library-recommend/