There have been changes since 1913, but some are still more equal than others . . . 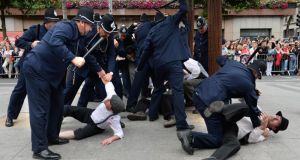 Dublin Metropolitan Police, dockers and Jacob’s factory workers in a re-enactment of events at the State commemoration of the 1913 Lockout on O’Connell Street, Dublin on Saturday. Photograph: Dara MacConaill

Exactly 100 years after Jim Larkin addressed supporters from the balcony of Dublin’s Imperial Hotel, a new generation gathered to hear him speak again. The words, at least, had not changed. Almost everything else – including the Imperial Hotel, which is now Clerys – had.

Guests at Saturday’s re-enactment included a Labour-backed Head of State and a Labour Tánaiste. They also included leaders of trade unions, which are not only legal these days but have sometimes been accused of having too much influence in government.

Organisers had laid on chairs for the most important guests, directly in front of Larkin’s statue. So on this occasion, perhaps, the great only appeared great because they had reserved seating. As the two-hour ceremony wore on, you could almost hear the standing masses paraphrase the man himself in their hope for better conditions: “Let them rise, and give us a go”.

Other key differences from 1913 were that the Dublin Metropolitan Police were present this time only as actors. The villains of the piece during the Lockout, they were pantomime figures here, booed as they arrived to arrest Larkin and baton-charge his followers.

Their successors, the Garda Síochána, looked on a little awkwardly. They have themselves, after all, had to deal with the occasional real-world riot, and in this very street too. But that was another day’s drama.

A small glitch
Saturday’s re-enactment was a slick production, although there was one small glitch in the props department. Just before President Michael D Higgins’s arrival on O’Connell Street, somebody noticed the GPO’s Tricolour had a hole in it – in the green section, to be exact.

But before we could work out whether this was a metaphor for the difficult historical relationship between nationalism and the cause of labour, somebody replaced the flag with a fully intact version.

Thereafter, the production ran smoothly. It was enacted on two stages: a main one in front of Clerys and a 1913-style tram, borrowed from the National Transport Museum and parked beside the statue.

The main stage featured protest songs by Ciara Sidine, a performance of the St Agnes Youth Orchestra, and readings from Strumpet City by actors Bryan Murray and Angela Harding. The tram was the platform for a dramatisation of scenes from the Lockout by ANU theatre company and for an extract of Larkin’s speeches, performed by Ger O’Leary.

At street level, meanwhile, extras in period dress played the role of Dublin’s poor, chanting period slogans including “Free Rosie Hackett”. The vintage shirt collars looked a bit too clean, as if they were on loan from Bloomsday. But the performance was faultless: including a coup de theatre when, fleeing the batons of the police, the crowd froze for a moment into shapes from a famous photograph of the original events.

On the more formal side of the programme, the Army No 1 Band played the National Anthem. Mr Higgins and trade union leaders from Ireland, Britain, and mainland Europe laid wreaths. This was followed by a minute’s silence for victims of the Lockout.

Gentle giant
Larkin’s granddaughter, Stella McConnon, was among those present. Speaking afterwards, she recalled Big Jim’s lesser-known side. Standing six feet four on “size 13” feet and with a voice so strong he didn’t need a loudspeaker to address crowds, he was also the proverbial gentle giant.

He babysat her on occasion, and she remembers him giving her paper and crayons to draw. She still paints, more than 70 years later, and says the habit started with him.

Contemporary politics did not impinge much on the event. True, the production extras departed from period script at one point to chant “Down with austerity!”, but this seemed to be more for fun than in earnest.

Later Dublin lord mayor Oisín Quinn spoke of Larkin’s campaign for collective bargaining as unfinished business. And although he didn’t have any formal role in proceedings, the presence of John Goss, the pilot sacked by Ryanair last month, made its own point.

That aside, the nearest thing to controversy was when Minister for Heritage Jimmy Deenihan rose to make the closing remarks. Hearing him from the podium, one man in 1913 dress quipped: “It’s William Martin Murphy. ” But Mr Deenihan kept it short and apolitical.