National Heritage Week, with 1,700 events attracting over 400,000 people, shows what is possible 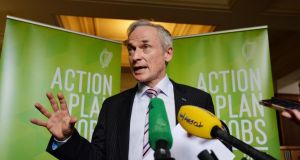 Minister for Jobs, Enterprise and Innovation Richard Bruton: having ’great places to live and work’ is key to plan to create an extra 7,000 jobs from foreign firms every year up to 2020. Photograph: Alan Betson / The Irish Times

You have only to look at the success of initiatives such as National Heritage Week (August 23rd-31st), with its 1,700 events attracting a combined attendance of over 400,000 people, to see what is possible.

With steady small-scale investment, local communities can deliver. Support of €17,000 in Youghal, for instance, for a medieval festival during Heritage Week generated almost €500,000 for the local economy.

Organising the entire Heritage Week calendar of events is undertaken on a mere €250,000 budget nationally. So if the 400,000 who attend spend only an average of €2.50 (a gross underestimate), that expenditure of €1 million across local communities is very significant.

There is no major capital investment required, and no ongoing revenue cost to cripple service providers. All that is needed is regular, very small-scale, support to capture the energy and imagination of local people and communities across the country.

This phenomenon is being witnessed across Europe, and yet in Ireland we are in danger of missing the boat. The Heritage Council and others involved in the sector are increasingly frustrated at the lack of reasonable resources.

Job creation Due to financial constraints

, we often have to say no to worthwhile heritage initiatives that would enhance our natural and built environment.

Supporting heritage initiatives also meets the Government’s aim of getting people back to work.

Recently, Minister for Jobs Richard Bruton, publishing a plan to create an extra 7,000 jobs from foreign firms every year up to 2020, said the key to achieving this was having “great places to live and work”.

How right he is. Yet, we find that the wrong perpetrated on the heritage sector as a whole in the 2009-2012 period, when it was the subject of disproportionate budget cuts, has not yet been corrected.

The opportunity to right that wrong now presents itself. The heritage sector has shown itself to be resilient, flexible and innovative enough to survive the worst that economic policy can throw at it. It merits renewed investment because it is about people, our society, and developing our sense of well-being. Now is the time to realise its potential through investing in its future, in line with our emerging economic recovery.

A little goes a long way

We have shown what is possible in many areas. The Heritage Council’s county heritage officer network, with its local forums and county heritage plans, is only scratching the surface.

The Wicklow Uplands Council provides a model of success and sustainability for Ireland’s other upland areas. The Bere Island community wins European accolades for its heritage-led approach, as does the Irish Walled Towns Network for its inclusive education programmes. Our Heritage in Schools programme has the potential to reach many more pupils and to expand to the secondary sector.

Just imagine what could be achieved if you had the capacity to expand these programmes. Imagine if this limited number of successful models of local initiative were replicated right the way across the country. Communities are clamouring for such support.

We look forward to an opportunity to raise these matters with the new Minister of Arts, Heritage and the Gaeltacht, whose own support for local heritage groups in her native Co Monaghan, and her five years’ membership of the county’s heritage forum, reflects her commitment and understanding. Let’s hope that together we succeed. There is a lot at stake.

Michael Starrett is chief executive of the Heritage Council

Suing U2: who really created that ‘Achtung Baby’ guitar solo?
5

Where did it all go wrong for Johnny Depp?
10