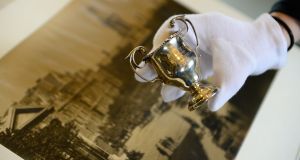 A silver cup awarded to those who defended Trinity College during the Rising. Photograph: Cyril Byrne/The Irish Times 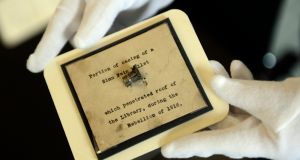 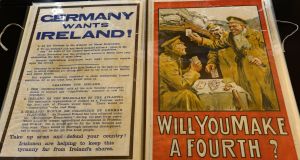 One of the 1916 posters from the Trinity College exhibition. Photograph: Cyril Byrne/The Irish Times 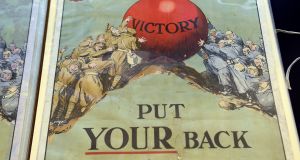 One of the 1916 posters from the Trinity College exhibition. Photograph: Cyril Byrne/The Irish Times

As a standalone item, the copy of the Proclamation which was plastered to the walls of the GPO during Easter Week 1916 would be a valuable document in its own right. But it is what was posted underneath that makes it truly unique.

It was taken home from Dublin by Major Louis Tamworth who was in command of the Montgomeryshire Yeomanry. It had been given to him by a British soldier who tore it down from the walls. On his return to Devonshire, Tamworth had it framed and mounted until Trinity College Library bought it in 1970.

Tamworth did not realise that behind the copy of the Proclamation were no fewer than 11 recruitment posters for the British army. It was common at the time for a poster site to be plastered over multiple times.

Due to the heat caused by the fires in the GPO, it was possible to separate each of the different posters. The high temperatures in the GPO mitigated against any ink bleeding as the posters were fused together.

The library’s preservation and conservation department managed to separate each of the different posters and more than half of them were preserved intact.

They tell a fascinating story. The poster plastered over by the Proclamation was for men between the ages of 41 and 47 to join the labour battalions which were involved in manual work on the Western Front which often meant burying the dead.

The one underneath in vivid blue issues a clarion call “Up the Dublins” and extols the bravery of the Dublins at Gallipoli without mentioning any of the slaughter. The one underneath that declares that “Germany wants Ireland” and warns that Ireland is in danger from “German planters”.

The posters will go on display as part of TCD’s Changed Utterly exhibition which will open in the college next week.

The GPO was Dublin’s communications hub and a very conspicuous site for recruiting. TCD assistant librarian Shane Mawe said the decision to post over the recruitment posters was a deliberate act of defiance on the part of the rebels.

Also going on display as part of the exhibition will be the tiny but historically significant Officer Training Corps (OTC) cup given to those students with military training in the college who protected Trinity during Easter Week. The idea was that of Sir Edward Carson, then the MP for TCD.

Another exhibit will be the diary and photographs of Elizabeth “Elsie” Mahaffy, the daughter of former Trinity provost John Mahaffy. She was trapped there for the duration of Easter Week and wrote a valuable eyewitness account of the Rising. A bullet that was lodged in the roof of Trinity will also be part of the exhibition.

Trinity has joined the Bodleian Library, University of Oxford and the British Library to identify, collect and preserve websites that can contribute to an understanding of the Easter Rising. Many of these websites are transient but contain valuable research. Web archiving will ensure that the material is available to the public.

See www.tcd.ie/Library/1916 for more details. You can also follow the project on the Changed Utterly blog on Twitter @TCDLib1916.

A bottle of whiskey distilled in Dublin in 1916 has come to light and will be sold at auction next month. But the perfect spirit to toast the centenary of the Easter Rising will not come cheap. The bottle of 70 per cent proof whiskey has been valued at up to €25,000 by Whyte’s Auctioneers in Dublin who will offer it for sale in an auction of 1916-related collectibles.

The whiskey was made by the now defunct Dublin Whiskey Distillery on Jones Road and was then matured in a cask for 50 years. In 1966, it was bottled by the purchaser of the cask, McGlade’s pub in Belfast, and labelled “Very Old Irish Whiskey: Bonded 1916”.

Auctioneer Ian Whyte said it was, to his knowledge, the oldest and most valuable bottle of Irish whiskey ever to appear at auction. The bottle has been consigned to the auction by a descendant of Frank McGlade, founder of P & F McGlade’s Bar on Donegall Street in Belfast.

The seal on the bottle has been broken, suggesting that someone had tasted a drop but Mr Whyte said the level was still “just below the neck” and “whiskey never goes off”.

The bottle will go under the hammer on March 13th in the auction at the Freemasons’ Hall on Dublin’s Molesworth Street.