Enlisting for my enemy’s enemy

An Irishman’s Diary about Irish soldiers in the continental service 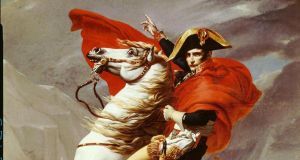 A victorious Napoleon crossing the Alps. Gen Henry Clarke was by his side on the less auspicious occasion of the batlle of Waterloo.

This first week of May marks the bicentenary of the lifting of the Siege of Antwerp (1814), the last major action of the Irish military diaspora on the Continent.

The Irish tradition of military service abroad extends back to 1587, when Irish units were formed in Spain. Many turned to soldiering abroad after failed rebellions or discriminatory laws which left few opportunities for Catholics at home. The Jacobite War (1689-91) was fought between supporters of the deposed Catholic King James and those of Protestant King William. After the capitulation of Limerick Patrick Sarsfield’s 14,000-strong Irish Jacobite army withdrew to France, an event which became romantically known as “The Flight of the Wild Geese”.

The Irish Brigades in France and Spain wore Jacobite red uniforms – the colour of the deposed Stuarts – symbolising their allegiance to the Jacobite cause. The Irish hoped that a Catholic Stuart restoration would lead to the restoration of their lands and rights at home. Irishmen took part in most of the defining battles of the 18th and early 19th centuries, where they established themselves as the storm troopers of the continental armies.

Nearly 270 years ago, in 1745, the Irish Brigade of France broke through the right flank of the British column at the battle of Fontenoy in Belgium seizing victory from the jaws of defeat for France. This battle was their most famous victory and the pinnacle of Irish military prowess.

Enemy flags or colours were often a prime target on the battlefield, given that their loss was seen as a major disgrace to a regiment. While researching my book Irish Brigades Abroad, I finally discovered the British flag snatched by Sgt Wheelock of Bulkeley’s Regiment at Fontenoy. The flag was never properly identified until I found it referenced in a 1745 French newspaper, and tracked it down in an old illustrated hand-painted manuscript in the main research library in Paris. This flag – the only one taken in the battle – came from Sempill’s Regiment of Foot (forerunner of the King’s Own Scottish Borderers).

Well over 50,000 Irishmen served in the armies of France, Spain and Austria, some of whom were great military reformers who helped modernise some of the continent’s antiquated armies.

Gen Charles Kilmaine, born and bred in Fishamble Street, Dublin, was one of around a dozen Irish generals in the French army at the time. He commanded the left wing of the Armée d’Angleterre, (the army for the invasion of the British Isles) and the Armeé d’Italie (the French army in Italy) while Gen Henry Clarke was central to the creation of the Napoleonic Grande Armée as long-serving minister of war. He was on horseback beside Bonaparte at the battle of Waterloo.

The Irish Brigade of France had served that country for over a century before they were disbanded during the French Revolution, but several years later, in 1803, Napoleon formed a new light infantry unit called La Légion Irlandaise to spearhead an anticipated invasion of Ireland. However, they never set foot on Irish soil due to the defeat by Admiral Nelson of the Franco-Spanish fleet at Trafalgar in 1805, which scuppered Napoleon’s invasion plans.

Returning again to the Siege of Antwerp, in 1814 the British, as part of an Allied coalition, sent a large army into the French-occupied Low Countries to defeat Napoleon and besiege the Belgian city of Antwerp, which was then a leading ship-building port for the First French Empire.

Facing them there was a 500-strong Irish battalion of Napoleon’s army, which stood firm during the three-month siege. The legion’s Lieut Saint Leger was entrusted by the French commander, Gen Carnot, to liaise with the British, due no doubt to his excellent English and the governor of Antwerp afterwards recommended him for advancement.

But in the end the Franco-Irish garrison was forced to give up the city when Napoleon was ousted from power. The Irish unit was shortly afterwards disbanded and all its regimental property was destroyed, as per protocol, including its emerald green regimental colours and its cherished bronze-cast regimental eagles.

The rank and file were sent to the 4th Royal Foreign Regiment (the forerunner of the French Foreign Legion) and many others were either demobbed or transferred to other French regiments. And so ended the 125-year-old tradition of Irish service in France.