Damien Tiernan: My great-grandfather died on the ‘Lusitania’

RTÉ’s south-east correspondent recalls a family tragedy 100 years ago, that left three children without a father 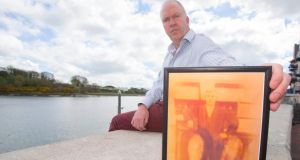 Damien Tiernan, RTÉ’s south-east correspondent, holds a photo of his great grandfather John Prior, who was 25 when he died on the Lusitania in 1915. Photograph: Patrick Browne

My great-grandfather perished on the Lusitania. His birth name was John Prior but he is listed as John Pryor. The family are not sure why or when this change happened. When the ship went down, he was listed – like the other Irish passengers – as “British”, because Ireland was part of the United Kingdom at the time. It is believed 140 Irish passengers and crew died when the Lusitania was hit by a German torpedo on May 7th, 1915 off the Old Head of Kinsale.

John was from a small farm in Kiltyhugh, Cloverhill in County Leitrim. In the 1911 Census, it shows he was married to Mary Anne and they lived with his father Patrick, a widower.

John Prior met my great-grandmother on an earlier Atlantic crossing to Ireland. At that time, both were returning home to Ireland to live, having spent some years in the United States.

However, their dreams of settling down in Leitrim were thwarted by harsh economic circumstances, and John Prior had to leave his wife and family behind to go back to America to make a living.

John Prior managed to get work in New York (possibly through his older brother James whom we believe emigrated a few years previously) and it must have paid well, as we believe he was one of the few who travelled back to Leitrim for the summer months to help on the farm, and then returned to New York for the winter.

In 1915, he was on his way home for the summer on the Lusitania, and this time he intended to stay at home in Ireland come what may.

John Prior was in third-class accommodation. This was forward of the bridge, above where the torpedo struck on the starboard side – at about 2.10pm in the afternoon. The ship went down in less than 20 minutes.

John Prior’s body was never recovered. The tragedy, which has always been spoken openly about in our family, left three children without their father: James (Sonny), my granduncle who was the oldest; my grandmother, Mary Kate who was born in 1912; and the youngest Rose, who was just three months old when her father died. John Prior never saw his youngest daughter.

His widow, Mary Anne, went on to marry again. She married Danny Bohan. One of Mary Anne’s daughters from that second marriage, Annie Gallagher, is living in Boyle, Co Roscommon.

My grandmother Mary Kate, who married and made her home in Drumgowla, Cloone, Co Leitrim, dearly cherished the only photo we know was taken of her father who drowned on the Lusitania. She married Joseph Tiernan from Cloone, and their eldest son Sean Tiernan is my father.

When I wrote Souls of the Sea about the fishing tragedies off the Irish coast in 2007, I was conscious of how drowning at sea affected my own family, the pain of never finding bodies and having no grave to mourn.

My aunt, Trudy Tiernan, is travelling with her husband Peter this weekend on a commemorative cruise from the south of England, over to France, and on to Cobh for May 7th in what will be an emotional trip. They are taking the original photograph with them on the journey back through time.

This centenary is personal for me and my family. It brings up the sadness of what happened 100 years ago. We can only think of how my great-grandmother and her children must have felt after the tragedy.

The TV equivalent of Larry Gogan’s own Golden Hour