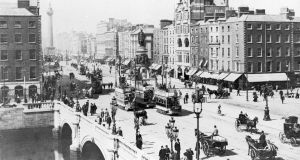 circa 1900: O'Connell street and O'Connell Bridge, Dublin, with Nelson's pillar in the background.

The slums of Dublin were worse than those in London, Glasgow or Birmingham, with mortality rates per 1,000 of 22.3, compared to 15.6 in London.

Women bore the brunt of poor housing conditions, having to cook over open fires, fetch and carry water from distant taps, often up several flights of stairs, organise space so as to provide minimum levels of privacy, and try to keep draughty rooms with high, albeit ornate, ceilings warm in winter.

Buckingham Street in the north inner city is a good example of a typical tenement street. The 1911 census returns tell us that 16 houses contained 1,273 people, and 107 households, most of them living in single rooms. Thirteen of these households were headed by women, either single or widowed. Number 13 provides a good representative sample: eight households, all single rooms, except one which is two-roomed, 49 people. Occupancy of the single rooms ranges from three to nine people, with 10 in the two-roomed dwelling.

Margaret Hayden (39), shares a room with her unemployed husband, Edward (41) and their three sons aged 13, nine and four. She has been married for 16 years and not lost any children. They are Catholic. The spacing between the children indicates possible miscarriages. Rebecca Brennan (55) shares a room with her husband, Thomas (54) who is a house painter, and their son, Frank, a barber. She’s been married for 20 years and had one child. The family is Church of Ireland, bearing out Sean O’Casey’s portrayal of the tenements as a mixed religious environment, most memorably in the character of Bessie Burgess.

Margaret Furlong (28) lives with her husband William (31), a dock labourer, and their eight-year-old son, Christopher. There is also a Mary Furlong, aged eight, entered as a boarder, but the enumerator has scored through her name and written “put down in error” – possibly Christopher’s twin sister, who may have died, as Margaret has lost one of her three children. Where is the other one? The family is Catholic.

Mary Kavanagh (39) shares two rooms with her husband Joseph (40) who is a general labourer, his brother Henry (42) who is a grocer’s porter, and seven children, ranging in age from two to 17. Her two eldest sons, Patrick and John, 17 and 15, have jobs as messengers, which means four incomes are coming into the household. Unusually, Mary describes herself as a housekeeper; most women looking after households leave the ‘occupation’ box blank, despite working from dawn to dusk. The family is Catholic.

Lucy McNamara (30) lives in one room with her husband, Thomas (38), with five of their seven surviving children (she gave birth to nine), ranging in age from 12 days to 12 years. Poignantly, the names of the dead children, Bernard and Josephine, and their ages at death, five and seven months respectively, are entered on the census form, but scored through by the enumerator with the comment “error: dead”. Poor Lucy obviously wanted to remember her lost children on an official document. Thomas is described as a labouring man. He is illiterate. The family is Catholic.

Marjorie Dixon (48) shares one room with her husband, George (53), a bricklayer, and their five children, ranging in age from 10 to 24. One son is a bricklayer also, and two of the girls are laundresses. There is also a “nurse child”, Thomas Power, living with the family, possibly a relative. Marjorie’s child mortality levels are utterly shocking. Married for 28 years, she gave birth to 13 children, of whom only six survived. The family is Catholic.

Maryann Bishop (32) shares one room with her husband, Henry (46), a labourer, and their two daughters, aged 12 and one. Maryann is Henry’s second wife; they have only been married for two years. Many poor women died in childbirth, and their husbands needed to marry again to provide mothers for their children and keep them out of orphanages and industrial schools. The family is Catholic.

This quick snapshot of one street in Dublin gives an idea of what life was like for poor women and their families in Dublin in 1911. Child mortality and overcrowded accommodation challenge our modern ideas about emotional attachment to children, the need for privacy and personal space, and hygiene practices. Women were the main ones holding families together in these highly adverse circumstances.

100 years ago today: the Clonmult ambush was the IRA’s worst disaster