Buy and sell: the life of a Waterford Viking 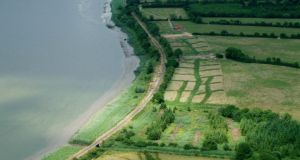 In the half-light of morning a group of Viking warriors emerge from their fortified riverside camp carrying a bier on which lies the body of their leader, who died the previous night.

They walk the short distance to the site where a grave has been dug, followed by a group of mourners. The place of burial has been carefully chosen, beside the track giving access to the camp and within view of the river that sustains its inhabitants and connects them with the Viking world.

Amid the customary scenes of grief from the dead man’s extended family and followers, the body is laid in the shallow grave. In accordance with the ancient traditions, the camp’s smith steps forward and, raising his heavy hammer above his head, brings it down and smashes the warrior’s sword into three pieces.

The sword fragments and the warrior’s other weapons, also deliberately broken, are arranged around his body and the grave is covered with a blanket. In the final act of the funeral the burial party makes a mound of stones and earth over the grave. After the ceremony the mourners return through the gates of their fortress, unsure of their future now their leader is dead.

You might be forgiven for thinking that this is a description of a scene from an episode of Vikings, the television series featuring the exploits of Ragnar Lothbrok and his band of men. In fact it is based on evidence uncovered during archaeological excavations at a ninth-century settlement at Woodstown, on the banks of the River Suir, six kilometres from Waterford.

The discoveries made at Woodstown shed new light on the process whereby marauding bands of Vikings established permanent settlements in the Irish countryside in the ninth century, following an initial phase of smash-and-grab raids on monasteries and secular Irish settlements.

The monks who compiled the early Irish annals called these Viking sites longphuirt, or “ship-landing”. As the name implies, these were places where the Vikings established their first beachheads. The fortifications constructed by the Vikings at Woodstown were large. About four and a half hectares – enough to accommodate Croke Park twice over – was enclosed by a ditch and an earthen bank surmounted by a wooden palisade.

The only settlements of comparable scale in the early-medieval Irish countryside were monasteries. In contrast, the typical residence of a native farming family at this time, the ring fort, generally enclosed an area of less than half a hectare.

Iron bolts indicate that Viking boats were being dismantled and repaired within the fortified area; the discovery of many rotary sharpening stones shows the importance the occupants placed on sharpening iron weapons and tools. The recovery of fragments of combs made from antler reveals the emphasis the occupants placed on their personal appearance.

The most important finds from Woodstown relate to trade and exchange. Viking activity in Ireland in the ninth century was motivated by the desire to accumulate wealth. One of the main objectives of Viking raiding was the taking of slaves for sale, but other goods, including amber, furs, timber, textiles, iron ore and foodstuffs, were also exchanged. Silver ingots, fragments of cut-up silver objects (hack silver) and small cast-lead weights demonstrate the centrality of trading to the lives of the people who lived at Woodstown.

Vikings were noted for their commercial acumen; their trade routes extended from the Suir to the Euphrates and from the Arctic to the Mediterranean. One of the most remarkable finds from Woodstown is a fragment of a silver coin minted in Wasit, in modern Iraq.

Along their eastern trade routes Vikings exchanged commodities such as amber and furs for silver coins minted in the Islamic world. They then used these as bullion in the course of trade across the Viking world; they were often melted down and recast as ingots.

In the absence of a standardised system of weights and measures, each Viking trader would have carried a set of weights. When the time came to do a deal that involved exchanging goods for their weight in silver, the vendor would have checked the purity of the silver being offered for his goods by making a small cut into it with his knife. If he was satisfied with the quality, he would then have weighed the silver on a simple balance scales, using his own weights.

Some of the 200 weights from Woodstown have been “personalised” with decorated fragments cut off larger objects, such as brooches. The most iconic of the decorated weights bears a mount with the image of a human head in cast glass.

Based on current evidence, it seems the Woodstown site was abandoned by the early 10th century at the latest. We don’t know why. Maybe the local Irish king came to resent the foreigners who had established themselves at swordpoint and decided to expel them from their stronghold.

Along with goods for exchange, a well-travelled trader might have brought disease, which could have fatally weakened the community. Possibly a rival band of Vikings established a competing settlement at a more favourable location on the Suir and encroached on Woodstown’s trading opportunities.

We do know that in the 10th century a settlement that came to be known as Vadrefjord was established downstream. It is better known to us today as Waterford.

Woodstown: Discovery, digging and display
When plans were drawn up for the N25 Waterford city bypass, 12 centuries of ploughing and erosion had removed all traces of the earthen bank that had once surrounded the Woodstown site. But archaeological test excavation before construction led to the discovery of the Viking site in 2003.

The site was declared a national monument in May 2005, and the bypass was diverted.

To date it is estimated that less than 5 per cent of the site has been archaeologically excavated.

Since 2011 a selection of the Woodstown finds are permanently exhibited in Reginald’s Tower, in the heart of Waterford’s Viking Triangle.