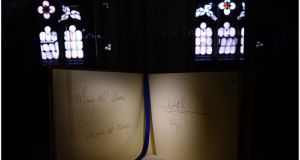 In all my years of schooling, there can’t have been a more educational hour than the one I spent in the Chapel Royal of Dublin Castle on Monday evening.

I was there to see a short play about the Great War, which at first sounded like a contradiction in terms. In fact, when I took my seat at 7.30pm, to be told that it would all be over by 8.15, I feared the generals directing operations were being unduly optimistic.

But far from repeating history, the Mouth of Fire theatre company fairly sprinted through The War of Words, as the piece was called, with great elliptical leaps where necessary. Sure enough, they had the four and a half years of global conflict wrapped inside 45 minutes.

That still left change enough from an hour for the castle’s resident expert to give us a brief introduction to the venue: which, as well as being an architectural wonder, is itself a masterpiece in historical concision.

Depending on your politics, the now deconsecrated Chapel Royal can be seen as either a shrine to the centuries of British rule in Ireland, or a chronicle foretelling the end of the 800 Years of Oppression.

It manages this trick by displaying the coat of arms of every lord deputy or lord lieutenant of Ireland, from Hugh de Lacy in 1172, via Oliver Cromwell, to Viscount Fitzalan in 1922.

The early names were carved on wood panels, the later ones on windows. But long before the War of Independence it was noticed that they were running out of room for new candidates. And by the time Fitzalan succeeded to the job, there was only one space left anywhere.

If the deftness of this summary of Anglo-Irish history is accidental, nothing else about the building was. A riot of Gothic revivalism, its architecture also somehow has a lightness of touch, as you notice if you rap your knuckles on what at first glance appear to be its stone columns.

Far from stone, the construction is mostly wood and “faux-pierre” plaster: a stronger version of papier-maché. So the chapel is, among other things, an optical illusion. And there is a good reason for this: namely that the river Poddle, which runs underneath it, rules out anything heavier.

The play, by the way, was a once-off, commissioned for the day that was in it: the centenary of Austria-Hungary’s declaration of war on Serbia. And yet it wasn’t just a history lesson.

As Cathal Quinn, the company’s artistic director, explained afterwards, it was deliberately framed in the present tense. So, in the arguments about whether the Lusitania is a civilian or de-facto military ship, for example, there are striking resonances with more recent conflicts, including the horror in Gaza.

The members of Mouth of Fire are a busy group these days. They were performing on two fronts in Dublin Castle this week, presenting Shakespeare in the Dubh Linn garden, as well as the war show (albeit not the same night).

There is the hint of an historic joke in this juxtaposition. One of the vignettes in The War of Words concerns the redesignation of the British royal family as the House of Windsor in 1917. As an exercise in rebranding, this compares well with anything Pepsi or the Apple Mac have since managed.

But they were forced into it at the time. As the war dragged on, it had become ever more embarrassing that King George V was a member of the house of Saxe-Coburg and Gotha, closely related to the Kaiser (and indeed to Tsar Nicholas, who had just set a dangerous precedent by abdicating).

The final straw was the Germans’ development of a heavy aircraft called the Gotha G.IV, which in March 1917 began bombing London, with great casualties. The royal name was no longer supportable in Britain after that and was changed by royal decree.

It’s said that when news of his cousin’s renunciation of German titles reached Berlin, Kaiser Wilhelm joked that, as a revenge, he would have to attend a performance of Shakespeare’s The Merry Wives of Saxe-Coburg Gotha (cheering to know that his sense of humour had survived the three years of slaughter).

The Merry Wives of Saxe-Coburg Gotha is not currently showing at Dublin Castle, nor is The Merry Wives of Windsor. Lovers of Shakespeare will have to make do instead with A Midsummer Night’s Dream, which continues until August 3rd.

The Disaster Tourist: Excellent rendering of the extraordinary
8