An Irishwoman’s Diary on David C Broderick, an Irish-American voice against slavery

Pivotal figure in history of California 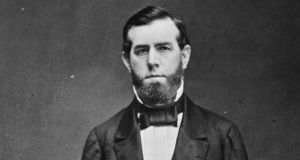 David C Broderick: tragic death had a galvanising effect on the debate in California on attitudes to slavery

The history of the Irish in San Francisco is woven into the fabric of the city – by the many streets named after its founding figures. Thousands of Irish immigrants were drawn to the city during the gold rush, hoping to take advantage of the opportunities afforded by an emerging metropolis. By 1880, some 33 per cent of the population was Irish. And many of these Irish people played a significant part in making San Francisco the city it is today.

O’Farrell Street, one of the main boulevards traversing the city centre, was named after Jasper O’Farrell, a Wexford-born surveyor who played a huge part in the layout of the city and its streets. McCoppin Street celebrates Frank McCoppin, from Co Longford, who in 1867 became not only the first Irish-born mayor of San Francisco, but the first Irish mayor in the United States. O’Shaughnessy Boulevard was named after Michael O’Shaughnessy, the chief city engineer who built the Yosemite Hetch Hetchy water system, bringing high-quality water to San Francisco. Hayes Street acknowledges the work of Cork native Thomas Hayes, who was behind the city’s first railroad. Brannan Street, meanwhile, honours Irish-American Samuel Brannan, California’s first millionaire and the founder in the 1847 of the California Star, San Francisco’s first newspaper.

Broderick did, indeed, achieve success in San Francisco – he set up a business minting gold coins and became a wealthy man. This put him in a position of power and influence, which helped his political aspirations. He soon succeeded in becoming a California state senator for the Democratic Party and, later, in 1857, a US senator.

But this was a particularly fractious period in Californian politics, and the divisions were to be the cause of his untimely demise. At the time there was an intense debate as to whether California should join the confederacy or remain part of the anti-slavery union. The Democratic Party was deeply divided into two factions: the pro-slavery “Chivalry Democrats” or “Chivs”, comprising mainly politicians from the southern states, and the anti-slavery “Free-Soilers” from the northern, more liberal states. Broderick was vehemently anti-slavery, and his influence and popularity meant his position on the issue was gaining traction in the state.

But it also meant he fell out with a one-time friend and ally, former California chief justice David Terry. From Texas, Terry was staunch in his pro-slavery beliefs, and blamed Broderick’s anti-slavery campaigning for the loss of his seat on the bench. Terry launched a cutting broadside against Broderick at a party convention in Sacramento, and when Broderick heard about it, he reportedly said: “I have said that I considered him [Terry] the only honest man on the Supreme bench, but I now take it all back.”

When word got back to the irascible Terry about Broderick’s outburst, he was infuriated, and challenged Broderick to a duel.

On September 13th, 1859, Broderick, Terry and a small crowd of supporters gathered at a secluded spot near Lake Merced, just south of San Francisco. Terry had chosen the pistols, and had been practising with them ahead of the duel. Broderick had not used them before. As they stood 10 paces apart from each other, preparing to shoot, Broderick’s pistol discharged prematurely, the bullet hitting the ground several feet away from Terry. Broderick looked up, and stood squarely facing his opponent. Terry raised his gun, and shot Broderick in the chest. He fell to the ground, the bullet having pierced his lungs.

Three days later Broderick died. He was 39 years old. One of his last statements was: “They have killed me because I was opposed to slavery and a corrupt administration.”

The manner of Broderick’s death made him a martyr. It turned public opinion against duelling, resulting in it being outlawed in many states.

But his death also made him a hero in the fight against slavery – it helped consolidate opinion in California in favour of abolition, and was seen as one of many events that contributed to the spiral towards civil war.

Today, along San Francisco’s handsome Broderick Street, there is little hint of the Irish-American senator’s violent end. But David Broderick’s life and death will be forever remembered for taking the US one step further on the road towards the abolition of slavery.

Ivan Yates turns the blowtorch on all politicians
5