An Irishman’s Diary on approaching Charles Haughey for a loan

‘I want that stuff back in dollars ’ 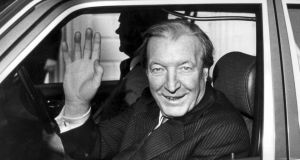 I should have been given a part. As the only man on the planet who borrowed money from Charles J Haughey, I warranted some sort of role in the television drama. It happened in Paris, Charlie’s favourite city after Donnycarney. As diplomatic correspondent for this newspaper half a century or so ago, I travelled around Europe with the then taoiseach, Jack Lynch, and his minster for finance, Charles J, covering their lobbying campaign of European leaders in an effort to gain entry into what was then known as the Common Market. It was no easy task. As the official website of the EU Representation in Ireland so niftily puts it: “Ireland’s agricultural based economy was choked by its dependence on the UK market and the country suffered from poverty, mass unemployment and emigration.” (Plus ça change .) Sometime in the early 1960s they called on the president of France, the formidable Charles de Gaulle. The general, who had remote ancestral links with Co Down, had a fondness for Ireland and came here for a long holiday once. He was inclined to favour the Irish application for membership but Ireland could not enter the market unless the United Kingdom was admitted at the same time. But de Gaulle was resolutely opposed to the UK’s application. Let the Brits in, he told the Irish duo, and they will only set out to wreck everything. It would be another decade before Ireland – and the UK – were granted membership.

The minister promptly switched from cordial welcoming to bullying mode. No. No. No questions about the Arms Trial or any of that auld s***e – that was all in the past. Gerry and his editor said they could not accept any restrictions. They left the minister’s office and contacted me at Donnybrook; such was the aura of brooding menace around Haughey they felt they could not accept his invitation to use the phone in his office but went outside to a public telephone box. I advised them to tell the minister that his first major interview as a member of the new cabinet would be seen as having no credibility if the question was not put and answered. Back they went and, forever the pragmatist, Haughey took the point without further argument and the interview went ahead.

Some years later, when he was taoiseach, I received a phone call from one of the coterie of hangers-on who surrounded him (and were indulged by him). The caller said he had it on the highest authority that my days as head of news were numbered because of the things we were broadcasting about the government and the taoiseach.

‘That sort of thing’

As it happened the Sunday following he came into the newsroom to do an interview for the This Week programme. As I accompanied him and advisers to the radio studio he pulled me aside and reiterated his apology: “You know me long enough to know I would have nothing to do with that sort of thing.”

Hands off the Toy Show: Why the Grinch can’t steal our Late Late Christmas
9

YA fiction: Growing up black in the US
Real news has value SUBSCRIBE