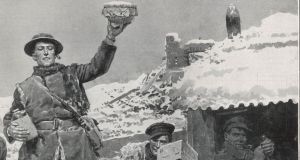 An illustration of Fr Ned Dowling during the first World War in ‘Christmas at the Front - Unpacking the Parcels from Home’ by British official war artist Fortunino Matania, taken from ‘Goodbye, Old Man: Matania’s Vision of the First World War’ by Lucinda Gosling in association with the Mary Evans Picture Library. 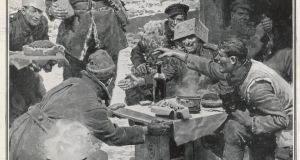 ‘Christmas at the Front - Unpacking the Parcels from Home’ by the British official first World War artist Fortunino Matania, from the recently published book ‘Goodbye, Old Man: Matania’s Vision of the First World War’ by Lucinda Gosling in association with the Mary Evans Picture Library. 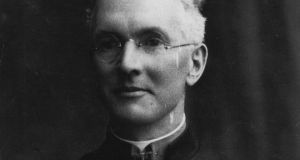 Fr Ned Dowling, who served as a Catholic chaplain with the Royal Dublin Fusiliers throughout the first World War. 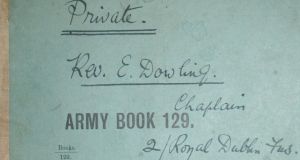 The first World War diary of an Irish Catholic priest, including his detailed account of Christmas Day 1914 on the battlefields, has come to light.

The diary was written by Co Kilkenny-born Fr Ned Dowling, who volunteered to serve as a British army Catholic chaplain and was sent to Flanders in November 1914, where he served with the Royal Dublin Fusiliers.

The diary contains a rare description of Irish soldiers attending Mass on the battlefield on Christmas morning, opening gift parcels sent from home, enjoying festive treats including plum pudding and, most remarkably, participating in the unofficial “Christmas Truce”, when the British and German armies briefly ceased hostilities and mingled in “No Man’s Land” to exchange gifts and play football.

Fr Dowling describes the start of the truce on Christmas Eve: “The enemy came out from his lair and sung out to us, while our fellows were not behindhand in showing the same friendly spirit.”

He said Mass on Christmas morning at a makeshift altar in an abandoned farm the Irish troops had occupied. From early morning the Irish soldiers “were forming up in the courtyard, white with frost”.

They had “been relieved from the trenches only yesterday” and so, with no time for Confession, he “gave a general absolution before the Mass, (and) no sermon except a few words of greeting, for it was cold standing there bare-headed and the Communions took a long time”.

Later that day, Fr Dowling was delighted to open gift parcels from Ireland and wrote: “No child waking to investigate the outcome of Santa Claus’ visit could show more pleasure than I did in opening my parcels. Amongst the little gifts were two new pipes, and, things I had sighed for, pipe-cleaners.”

Despite the appalling battlefield conditions, Fr Dowling was provided with a Christmas Day breakfast of rum and plum pudding.

The diary provides a graphic account of the duties of an army chaplain ministering to Irish soldiers on the Western Front, amidst the carnage of the first year of the war. It’s written with remarkable candour and attention to detail. Fr Dowling describes some of the battles and their aftermath, his efforts to comfort the wounded and dying, and conducting funerals amidst the shelling.

He also provides great detail about life in the trenches and encounters with various named Irish and other soldiers, German prisoners.

Although Fr Dowling served throughout the war, and stayed in the army until 1920, the diary only covers events during the first tumultuous year.

After the war, he returned to Ireland and, after serving as a curate in various parishes in Co Kilkenny, then became parish priest in the village of Camross, Co Laois in 1942. He served there for 18 years until his death, aged 74, in 1960.

He was known, informally, as “The Colonel”.

Looking at a republic falling apart from the inside
9