Kant’s lesson for nursing home operators: people shouldn’t be treated simply as a means to an end 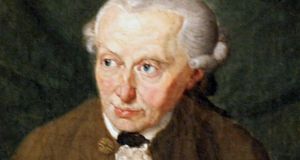 Immanuel Kant: ‘The duty of care includes care of oneself’

The controversy surrounding the Tuam mother-and-child home has highlighted how societal values have changed in Ireland. We have a radically different concept today of what it means to treat people with dignity and respect.

The controversy also challenges us to ask questions today about the role of carers. Is caring primarily the responsibility of the state, families or individuals?

Manus Charleton, author of Ethics for Social Care in Ireland: Philosophy and Practice (Gill and Macmillan), and a lecturer in ethics and social policy at Sligo Institute of Technology, has reflected deeply on this question, drawing on philosophical thought through the ages. He provides today’s very Kantian idea: People shouldn’t be treated simply as a means to an end.

Is caring for people a moral option or a duty?

Manus Charleton: “There are different views. For Hobbes, our nature is to seek power to satisfy our own desires. This is facilitated through a social contract between the people and government in which caring is left as a choice. We should be fair and kind to others, but only because it helps make for a society suited to pursuing our own interests.

“Kant saw caring as a duty that arises from universal moral laws. We could not rationally will a universal law that no care be provided to others because it entails that no care should have to be given to us. He’s not saying, ‘I’ll help you, provided you help me.’ He argues we would be in breach of our nature as rational human beings if we claim we have no duty of care.

“He calls it an ‘imperfect’ duty. This is because neither we (nor the State) can possibly care for everyone in all the ways needed. So we decide the amount and kind of care we give. But we become good people by how well we live up to the duty.

“In recent decades some moral philosophers have emphasised caring as a natural human emotion and disposition. They have pointed out that we need and benefit from care throughout our lives, from parents, family, friends and the State. On this view we should nourish and practise caring in all aspects of our lives – personal, social and work-related – to reduce misery and hardship and realise our humanity.”

How does a nursing-home manager avoid treating clients as a means rather than an end?

“The manager has to respect their autonomy. This is what Kant meant when he gave as a moral law that we should always treat people never simply as a means but always at the same time as an end.

“Kant recognised we naturally treat people as a means to some need or desire of our own. The manager treats residents as a means for employment. However, the manager is wrong to treat residents simply for this means or some other.

“At the same time the manager has to regard each person as their own end, which is as a unique individual with a right to be consulted and involved in all aspects of their care.”

You have looked at how such principles might transfer to other sectors, such as financial services. So what would Aristotle make of the Irish banking crisis?

“He would see the crisis in the banks as an example of what can happen when people ignore the requirement to manage their desires for both their own good and the good of society, which are interdependent. We are naturally social creatures from the existence of family, friends and society.

“Most desires, too, are natural and good. But if we give in to them too much it can turn out to our detriment, for example, if we take risks while ignoring the need to act with prudence and consideration for the wellbeing of others. He explains how to develop character qualities by making a rational choice to act according to the midpoint between excess and deficiency of desires and feelings. For example, acting with courage is midway between the excess of recklessness and the deficiency of timidity.

“This is the idea of the golden mean. It’s the way to act with power or excellence, which he understood as virtue. Also, he was aware from Greek drama how luck or fate can up-end us when we take unjustifiable pride in our apparent success and become blind to danger signals and heedless of warnings.”

Would it be ethical to outsource caring in the future to robots?

“Caring shouldn’t be depersonalised. It’s a natural human impulse and interaction that has to be nuanced to an individual’s needs and personality. And it includes being sensitive and responsive to often complex feelings in ways which can’t be predetermined.”

Does one have a responsibility to care for oneself?

“Yes. For Kant the duty of care includes care of oneself. Respect for oneself is also a duty along with respect for others. And for Aristotle selfcare is bound up with a natural desire to realise our own potential.”

Is ‘flourishing’ only a young person’s game? What does it mean to flourish in one’s old age?

“I think Aristotle was right in identifying the core of flourishing with making our own rational decisions about how to respond to our feelings and desires towards various situations that arise for us every day. This is how we form our character.

“As for the art of living, he recognised how hard an art form it can be, especially when we have to cope with adversity. But in old age we can still practise the art. It’s important for our self-respect, self-esteem and for how we would like others to see us. And we can hope to be better at it if we’ve learnt from experience.”

Question: Is fear of Friday the 13th a harmless tradition?

David Hume replies: “Superstition is favourable to priestly power . . . The stronger mixture there is of superstition, the higher is the authority of the priesthood.”