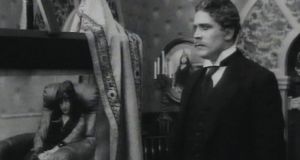 A still from the film Bruges-la-Morte (1915), based on the Georges Rodenbach novel 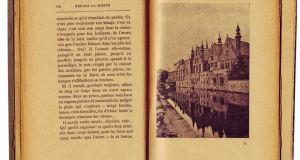 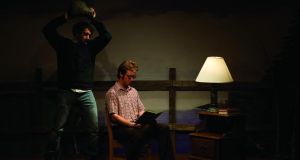 Life Is Not Enough by Joe Duggan

In 1928, a time between wars when art travelled to increasingly bold and transgressive places, a pair of seminal tomes fused fiction and photography in an inspired fashion, suggesting bold new possibilities for literature. They were André Breton’s surrealist masterwork Nadja, and Virginia Woolf’s gender-bending farce Orlando.

Both offered dazzling prose with vivid black-and-white images, one illuminating the other perfectly, resulting in audacious one-offs that astonish to this day – though it might be noted that many later editions of Orlando disregarded the photographic element, which was key to Woolf’s wry proto-feminist vision.

The basic concept wasn’t exactly new – examples of “photo-embedded fiction” stretch even further back, to 1892, with the publication of Belgian author Georges Rodenbach’s symbolist novel Bruges- la-Morte, a radical work that later served as an inspiration for Boileau-Narcejac’s seminal French crime novel The Living and the Dead, filmed by Alfred Hitchcock as Vertigo.

And so it continues: in recent years, the practice has been co-opted by authors as diverse as Iain Sinclair, Stephen King and Jonathan Safran Foer, with perhaps the most noteworthy – and committed – practitioner being the late, great German author WG Sebald, who delivered a remarkable quartet of novels (The Emigrants, Vertigo, Rings of Saturn and, his literary swansong, Austerlitz) that took the concept into intriguing, elliptical territory, with stunning results.

“The two worlds – literature and photography – have always interacted in any number of fascinating and unexpected ways,” says Source editor Richard West, who oversaw the project. “Now, more than ever, those worlds are crossing over regularly, in really intriguing ways, with new technology helping enormously.

“We’re always trying to create a dialogue and that’s ideally what these films are doing: examining the genesis of key works and dissecting individual creative processes while suggesting a bigger picture. We’re looking at the way literature has incorporated photography and vice versa.”

How, then, to label a wantonly unclassifiable sub-genre; one that delights in wilfully defying categorisation at every juncture?

In 1931, Maigret creator Georges Simenon dabbled in the form with a crime tale entitled La Folle d’Itteville, a collaboration with photographer Germaine Krull dubbed a phototexte by the publisher, who scrapped an intended series of follow-up novels after audiences summarily rejected Simenon’s inaugural efforts.

But the name stuck. Enthusiasts have dubbed the newer wave of prose-photo mash-ups “iconotexts”, while rediscovering and championing the efforts of neglected trailblazers, from Breton’s surrealist peers Louis Aragon, Gherasim Luca and Jindrich Styrsky to latter postmodern milestones such as William Burroughs’s apocalyptic 1970 “closet screenplay” The Last Words of Dutch Shultz.

Vivid influence on authors
As Richard West suggests, modern technology works wonders; these days the likes of Bruges-la-Morte, Nadja and Orlando are available to view for free within seconds, via the magic of Google Books and invaluable online repositories such as the Project Gutenberg (gutenberg.org).

That said, more that a century of creative trailblazing speaks volumes as to the deliciously unclassifiable – nay, downright slippery – nature of the medium, deftly reflected in the eclectic nature of the documentaries.

The series, which will be available to view free online via both source.ie and irishtimes.com, juxtaposes dissections of key works (an exploration of Austerlitz, for example, that features illuminating interviews with Sebald’s collaborators) with bigger-picture explorations of the often-curious relationship between words and images. Each film offers a short, sharp visual essay – none lasts longer than 20 minutes or so – that, viewed as a whole, builds to a fascinating picture of a relatively unsung chapter in literary history.

The vivid influence that photography has had on authors of note is directly addressed in an entry on Franz Kafka’s unfinished novel Amerika, posthumously published in 1927. Kafka, famously, never visited the US, and penned the work while deriving inspiration from what he called the “repose of gaze” offered by the still image.

“Photographs can often be invisibly present in literature,” says West, “and Kafka’s work is a prime example. He wrote Amerika using photos from travel books as a reference, and they very much inform the mood, the tone and the texture of what he ultimately created. His approach was very much formed by his experience of photography.”

A unique presence amid those under consideration is Wright Morris, a truly seminal figure in the history of “photo-text”.

Morris stands alone, in that he himself shot the pictures that accompanies his prose. An undervalued giant of American literature and two-time winner of the US National Book Award, his singular oeuvre includes several remarkable volumes combining his stark, pared-down texts and haunting, atmospheric photography, among them The Inhabitants, God’s Country and My People, and, arguably his masterpiece, The Home Place.

Morris afforded his words and pictures equal importance, painting stark, atmospheric tales of domestic life in his beloved Great Plains, possessing what he described in a 1991 Paris Review interview as a “camera-eye voice”.

“I attempt to perceive what the camera would see,” he continues, “without intrusive sentiments or observations. I sought neither to describe nor to arouse emotion, following the aesthetic of the camera and relying solely on the emotion I felt was present in the photograph.”

Viewed today (and again, a swift Google search will lead you to The Home Place in all its complete and unabridged glory), Wright Morris, who died in 1998, at 88, resembles something of a visionary: an artist arguably decades ahead of his time.

‘Attractive to pretty weird people’
“It’s fair to say that this particular creative process has been attractive to very interesting and, in some cases, pretty weird people,” says West, “and Morris was an unusual character indeed; one we really had to include. You look at his work, it’s truly unique. The Home Place is a really fascinating book.”

Elsewhere, one of the most illuminating and effective entries in the series of shorts is one of the most disarmingly simple: Using Photos to Write Novels, a candid discussion with Sri Lankan-born author Roma Tearne, whose novel The Swimmer made the Orange Prize long list in 2011.

Tearne calls upon her own makeshift library of found photographs for inspiration when crafting her fiction – a treasure trove of tales-in-waiting. It’s a simple, compelling portrait of the writer’s process, as we observe her fishing through boxes of images, the people contained within taking on, in her words, “a life of their own . . . They have multiple lives, really”.

Ultimately, as all arts documentaries should, these illuminating, occasionally revelatory films send you directly back to the work (not that you ever need an excuse to revisit WG Sebald, for starters) and towards volumes crying out for rediscovery: The Home Place and Bruges-la-Morte being key examples.

If they blur the lines between photography and fiction further, then they’re doing their job.

The first of Source/Irish Times photography and literature films, exploring Bruges-la-Morte, can be viewed at irishtimes.com and source.ie, with additional titles added weekly through August and September. The new issue of Source Magazine, which is an essential companion piece to the season, is out now