Zal Batmanglij goes anarchist with his eco-thriller The East 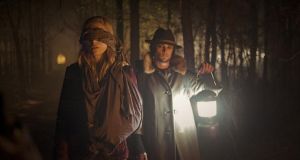 See no evil: Brit Marling and Shiloh Fernandez in The East 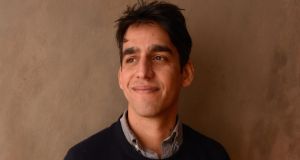 But Zal Batmanglij knows whereof he speaks. Four years ago, he and actor/writer Brit Marling spent two months living with followers of the freeganism movement. They bought nothing. They travelled by hopping on railroad freight cars. They retrieved discarded food from dumpsters.

Their experiences have now formed the basis of a highly original thriller entitled The East. Batmanglij directs Marling as a private security operative who goes undercover with (according to your political inclinations) eco-terrorists or eco-liberators.

So were their experiments in alternative living research for the film to come?

“No. We were just fascinated by this lifestyle and wanted to look within it,” Batmanglij, a passionate 32-year-old Iranian-American, enthuses. “Brit and I were fascinated by the generational dissatisfaction around. A lot of our generation thought we’d been conned.”

Zal doesn’t pause when I ask if he would consider living that life permanently.

So, what did he miss most when living apart from conventional society?

“Nothing, really,” he says. “It all went away. I didn’t need to shower. I didn’t miss movies. Once you disabuse yourself of all that, it becomes easier. Actually, it was harder to reacclimatise when I got back. I remember once getting caught in the rain while riding our bikes. Not having a towel was hard. But you get by. I find this life – living in hotels promoting films – much more inorganic.”

The director is part of an Iranian family that emigrated to France and then the US after the Islamic revolution of 1979. Raised in Washington DC, Batmanglij studied at that city’s Georgetown University and graduated in 1982 with a degree in anthropology. Later, he attended the American Film Institute Conservatory and teamed up with Marling (also a Georgetown graduate) for an impressive debut feature entitled Sound of My Voice.

It sounds as if the Batmanglij clan is a talented bunch. His mother, Najmieh Batmanglij, is a highly respected chef and cookery writer. His younger brother Rostam Batmanglij is probably the most famous of the bunch. He is the keyboardist with arch pop masters Vampire Weekend.

“I didn’t expect that to happen at all,” he says of his brother’s band’s success. “It’s really fun. I’m travelling through Europe and one of the albums I’ve downloaded is Vampire Weekend.”

Has it all gone to his brother’s head?

“Oh, no. He still travels economy when he flies to gigs. But then they were successful almost from the beginning. I remember them driving in van when they were first touring. By the time they got to us in LA they were already quite famous. They offered a good example to us. They did it their way with integrity.”

Batmanglij gives the impression that politics got to him before film-making did. While still at Georgetown, he remembers having this revelation that the straight world was “a con”. The university was geared towards producing solid professionals: doctors, lawyers, engineers. But somehow or other Marling and Batmanglij saw through the tissue of conformity. That generation does seem to be impressively engaged with politics. Anybody who thinks that Generation Y is dozing its way to complacency has not been paying attention. He points to Edward Snowden, the former CIA employee who recently fed intelligence on surveillance to the Guardian newspaper.

“Nobody can seem more politicised and glamorous than the baby-boomers,” he laughs. “But their kids are surprisingly robust and late bloomers. Whatever you think of Edward Snowden, it took bravery to do what he did. I think we will see more of that. We are fighters. And we will need to fight in the years to come. The system is holding on by a thread. A strong gust will blow it down and we will need to fight.”

He goes on to speak – with genuine sadness – about the collapse of the financial structure in 2008. A facade had fallen and the system was revealed in all its fragility. The East engages with the continuing corruption of capitalism in challenging ways. The cadre at the centre of the story – for which the film is named – stage quasi-violent stunts to expose the dishonesty of powerful corporations. In one key set-piece, they break into a party hosted for a pharmaceutical firm and lace the champagne with one of their more dangerous products.

The idea emerged following a story about the dangerous side effects of fluoroquinolone antibiotics.

“The idea that somebody could take this and maybe end up in a wheelchair was shocking,” he says. “When we heard that news story and we told people they’d say: ‘Didn’t the woman sue them?’ But the warnings are all on the side of the bottle. We thought there was definitely something wrong there.”

Their first notion was to construct a story in which a victim confronted the makers of the drug. But that would always end up with the patient being patronised. “They would claim there was a pre-existing condition or something. That’s how it goes. So we thought: would they be so patronising if they’d literally been given a taste of their medicine?”

Which leads us to the unavoidable question: where does Batmanglij stand on aggressive direct action?

“I think the beauty of film is that you can exorcise these ideas. I think of this as an exorcism rather than a prescription. Look, Batman is not a prescription to dress up in a leather suit and fight crime.”

Batmanglij does strike me as a committed radical. But he doesn’t come across as any sort of bomb-thrower. He is too reasonable in his thinking for that. When I mention that The East was made by a wing of 20th Century Fox – partners of Fox News and News International – he forcefully argues that, as well as seeking out the villains in large corporations, we should praise those who do good in those bodies. And Zal is no sort of anti-American. He greatly appreciates the shelter his family received after the Ayatollahs took over.

“This is a great place for refugees,” he says. “It’s a place for disenfranchised people, for people who are starting again.The country gets so beat up in the media. It’s worth remembering how much we love America.”

yyy The East is reviewed on page 1