The Ticket Awards 2016: Our film writers select their favourite movies of 2016

Donald Clarke and Tara Brady choose the 10 best films of 2016. 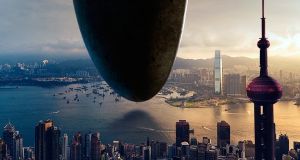 See something missing? Want to have your say? Vote now in The Ticket Awards . . .

ARRIVAL
Intelligent science fiction is not rare. It is, however, strange to see such stories play to big houses during “awards season”. Denis Villeneuve directs Amy Adams as a linguist attempting to connect with aliens. Beautiful. Emotionally satisfying.

PATERSON
Jim Jarmusch directs something that looks very like a Jim Jarmusch film. Adam Driver plays a (bus) driver called Paterson in the town of Paterson, NJ. The result is proof that idyllic lives need not be uninteresting.

EMBRACE OF THE SERPENT
The last survivor of an annihilated Amazonian tribe encounters an elderly white man desperate to cure the disease that threatens to eat up his last years. Ciro Guerra’s angry post-colonial epic has soared in reputation over the year.

SON OF SAUL
Shot in narrow ratio with a furiously mobile camera, László Nemes’s film follows a Sonderkommando as he seeks a decent burial for his son in Auschwitz. Nemes wisely relegates the greatest atrocities to the edge of the frame.

THE WITCH
Is Robert Eggars’s bleak, windswept drama really a folk horror? Perhaps so. But it’s also an insightful study of the madness that attends efforts to extend the frontier. The end divided viewers.

THE EDGE OF SEVENTEEN
Director Kelly Fremon Craig has mentioned John Hughes as an influence on the development of her coming-of-age comedy. But thanks largely to a stunning performance by Hailee Steinfeld, the picture remains very much its own beast.

MUSTANG
Deniz Gamze Ergüven’s debut – the tale of five Turkish sisters fighting for independence – won the most prestigious prize at the Cannes Director’s Fortnight and received an Oscar nomination for best foreign- language picture. It is a marvel.

PETE’S DRAGON
What is wrong with the world? David Lowery’s remake of a so-so 1977 Disney entertainment proved to be the most delightful and moving family film of the year. Sadly, almost nobody saw it.

- The films of the year listed here are just one of many categories in The Ticket Awards 2016. You can read all about them via the links below, and vote for your favourite – or add your own choice. And everyone who takes part will be in with a chance of winning one of our fantastic prizes.

Vote now for your favourite movies, performances, albums, artists, gigs and songs of 2016