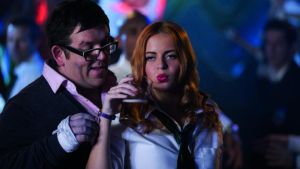 Let’s pretend the irony was intended. Shall we? The third film in what everybody seems to be calling the “Cornetto Trilogy” finds Simon Pegg playing a middle-aged man who can’t quite escape his adolescence. He listens only to music from the late 1980s. He still thinks getting drunk is big and clever. And so forth.

Here’s the thing. The comic aesthetic that Pegg and Edgar Wright, his loyal director, pioneered in the TV series Spaced and perfected with Shaun of the Dead began to wear thin about halfway through the absurdly overextended Hot Fuzz. But, like the protagonist of The World’s End, the team just can’t stop themselves from digging out their old party clothes and returning to ancient haunts.

The editing is still fast and rhythmic. The camera still sweeps dramatically. Nick Frost continues to sling quips at Pegg. There are movie references galore. But the enterprise now feels stale, tired, wearily familiar. There was more invention in one 25-minute episode of Spaced. Heck, at times, The World’s End plays like one of the many pale copies of Shaun of the Dead. It’s all I can do to stop myself from mentioning Lesbian Vampire Killers. (Oops! Too late.)

After a lengthy prologue explaining how, two decades ago, Gary King (Pegg) and his pals failed to complete a pub crawl across a quaint home-counties village, the picture finds its hero attempting to round up the team for one more crack at the marathon booze-up.

Watch the trailer - The World's End

Gary remains trapped in late-Thatcherite goth. Each of his friends has turned into the sort of suburban stereotype that litter the smug imaginings of people who make off-the-peg cult movies for a living. It seems crackers to ask such fine actors as Paddy Considine, Martin Freeman and Eddie Marsan to all play the same thinly drawn non-character: suit, family, posh car, mortgage, Bluetooth. But here they are.

Anyway, after some mildly amusing social comedy, the film takes its expected, yet still weirdly jarring, lunge into horror. One of the joys of Shaun of the Dead was the way it layered pointers to the coming apocalypse throughout its opening sections. The World’s End is much more crudely constructed.

Aside from one brief encounter with malevolent hoodies – and the fact that the bartenders don’t recognise Gary – there is nothing to prepare us for the ludicrously sudden embrace of paranoid possession mythology. One minute it’s The Big Chill; the next it’s Children of the Damned.

All this would be bearable if the film weren’t so convinced of its own significance. A full half-hour longer than Invasion of the Body Snatchers, The World’s End swells with the same class of pomposity that drove aging, progressive rock stars to compose triple-albums about the exploration of distant galaxies.

It really is time to move on, boys.

The best family-friendly films on Netflix
7

How I learned to love Seamus Heaney’s poetry
8

Coronavirus: Destination New York – Why have so many died in this city?
9