The Taste of Money

The Taste of Money - Trailer 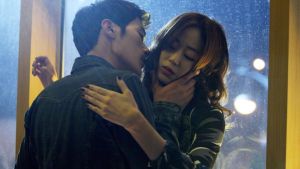 Film Title: The Taste of Money

Well, here’s something we didn’t expect to see. Three years ago, Im Sang-soo’s updating of the Korean classic The Housemaid played to modest acclaim at Cannes and then failed to open in these territories. For some odd reason, this sequel to the remake (do keep up) has, despite being roughed up at the 2012 festival, now made its way to blameless cinemas.

As you probably won’t remember, Sang-soo’s updating of Kim Ki-young’s film – which concerned the arrival of a sexually predatory maid into a middle-class Korean home – moved the core family way upmarket. It was all fine crystal, sports cars and marble fireplaces. As Southeast Asian variations on Dallas go, it passed the time in pleasingly disreputable fashion.

The plot suggests nothing so much as one of those dubious Harold Robbins novels that delighted inquisitive teenagers in the 1970s. We go among the horrible doings of Seoul’s richest, most tasteless family: CEO Yoon Yeo-jeong, his two troubled children and – most outrageously – his appalling, implausibly evil wife Baek Geum-ok.

If the director had the older lady arrive on a broomstick surrounded by flying monkeys, he could not have more forcefully telegraphed her rampaging malevolence. Before too long, she’s seducing some members of the young help and jealously plotting the premature demise of others.

All this is carried out in a heightened, superficially lush visual language more appropriate for the advertising of high-end furniture or discreet escort services. Sang-soo’s explicit romp is, at times, fun for all the wrong disgraceful reasons. But, despite pointedly isolating that quantity in the title, the film seems a great deal fonder of the taste of money than it pretends. Move along.