The Siege of Jadotville: How Ireland almost had its own Alamo 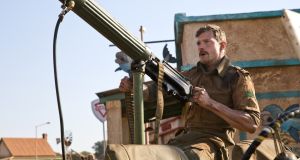 Jamie Dornan in The Siege of Jadotville

“There’s never a day passes that I don’t think of Jadotville,” John Gorman says. “The scariest thing was the priest giving us the last rites.”

In September of 1961, Mr Gorman, now an unstoppable raconteur, was a fresh-faced 17-year-old private in the Irish army. Like most of his comrades, he had little understanding of the political intricacies - triggered by an attempted secession by mineral-rich Katanga - that were tearing the Republic of the Congo apart. The men of Company A, led by the hugely admired Commandant Pat Quinlan, eventually found themselves defending the small mining town of Jadotville. Over six brutal days, 150 troops, designated UN peacekeepers, resisted attacks by around 3,500 rebels led by battle-hardened mercenaries.

“A lot of people have likened it to The Alamo or to Rorke’s Drift,” Leo Quinlan, the late commandant’s son, comments. “The difference is the Irish all came home alive.”

The incident now forms the basis for an action film from debut director Richie Smyth. Jamie Dornan, wielding a decent Kerry accent, takes on the role of Pat Quinlan. One might reasonably ask why the story has not been told on film before. Following an inevitable ceasefire, the soldiers were taken prisoner and, after six frightening weeks, returned home to a deafening silence that failed to lift for decades.

“Those guys didn’t get the recognition they deserved,” Dornan says. “In fact the opposite. They got that term Jadotville Jacks. They have had to live with that and they appreciate any light that can be shone on their heroics.”

In their different ways, both John Gorman and Leo Quinlan, who followed his dad into the army, worked hard to secure the recognition that has belatedly come the company’s way. Before the premiere of Smyth’s The Siege of Jadotville at this year’s Galway Film Fleadh, Quinlan was able to announce that the government was to issue a “unit citation” (the first ever awarded) honouring the veterans.

“The recognition came in bits and pieces over the last 10 years pushed by veterans in the midlands mostly,” Mr Quinlan says. “I took up the gauntlet about a year ago and I am pushing for medals to be awarded to the people my father recommended. I had meetings with the ministry of defence. [MINISTER]Simon Coveney was very helpful and they agreed to a unit citation award. But I’m still chasing the medals.”

John Gorman was among those veterans from the midlands who worked hard to secure the recognition they deserved. He left the army in 1984 and began burrowing into files in search of his colleagues. He found one in Perth, Western Australia and another in a mental institution. He reckons that he has only “eight to 10” still to track down.

“It was very hard on the phone bills,” he says. “I achieved more than I expected. I expected vindication and recognition. I wanted a monument put up to A Company. So I got a six-foot monument in Custume Barracks [IN ATHLONE]. And I looked to get a nominal roll on it. It was an awful job to find them.”

True to events Astonishingly, the story told in The Siege of Jadotville seems to be largely accurate. The odds faced were astronomical. The Irish soldiers, though apparently well trained, had no combat experience to speak of. The film casts an unlikely Mark Strong as the young Conor Cruise O’Brien, who, as special representative to the Secretary General of the UN, was responsible for the flawed attempts to maintain order following the uprising.

“They were just ignored afterwards,” Leo Quinlan says. “The Congo was a mess. The United Nations made a mess of it. There were military decisions made with political interference. As a result many people died who shouldn’t have died.”

Leo’s father seems to have conducted himself with enormous competence and bravery. Thrust into an impossible position, he planned a textbook defence that would have brought credit on any officer in any era.

“I can tell you it would be very hard to fill Pat Quinlan’s boots,” John Gorman remembers. “He was a great leader. I remember, when they put up patrols past where we were based, Quinlan saying: ‘Just act normal. Do what you’d normally do.’”

Some mystery still surrounds the political manoeuvring that left the company so awkwardly stranded. The Congo had declared independence from Belgium just a year earlier and was in no condition to protect itself from the Katangan insurrection. In this era, as post-colonial counter-revolutions brewed, mercenaries suddenly found themselves greatly in demand. The rebels were, Quinlan explains, “led by men in their late thirties and forties who were battle-hardened in the second World War and the Korean War”.

This makes his father’s achievement all the more remarkable.

“It turned out he was a brilliant tactician,” he continues. “He personally placed every trench. He always told me: ‘You don’t put men where you can put bullets’. You have interlocking fire. You cover the area. He dug them into anthills.”

When the ceasefire was eventually granted and the opposing forces entered the compound, the rebels were astonished to find no Irish dead. It is believed that as many as 300 Katangans were killed. The film does not cover the grim six weeks when the men were prisoners of war.

“I haven’t told anyone this before,” Quinlan says. “My father was dragged out at night to a mock court martial, sentenced to death, blindfolded and heard ‘ready, aim…’ and then nothing. Then he was brought back to his room. That happened twice.”

Pat Quinlan went on to a distinguished career. He was 42 at Jadotville. He was eventually promoted to full Colonel and served at the Curragh Camp until his retirement at the age of 60. I wonder if he grumbled much about the lack of recognition.

“He didn’t talk about it too much. His priority was to bring his men home alive. At his funeral, many old soldiers came up to me and said: ‘Your father met my fiancé the day we were leaving Athlone and said: “I’ll bring him home to you.’”

John Gorman’s mother was not among those receiving any such reassurances. She did not even know he was in Africa.

“I was 17 and a half. She’d probably have come and taken me off the plane is she knew,” he laughs. “But she said the rosary when she heard about the Irish at Jadotville. So, I suppose her prayers were answered.”

Another bank holiday classic. John Mills (of course) is among those standing firm against Jerry as they await the miracle of the little boats.

The grand folly directed by John Wayne himself is a lot more fun than the rather po-faced version from 2004. The director plays Davy Crockett

Cy Enfield’s durable - if politically dubious - film tells the story of the British defence of Rorke’s Drift against Zulu warriors in 1879.

Yes, it does qualify. The most exciting sections of Richard Attenborough’s star-studded drama follows Colonel John Frost (Anthony Hopkins) and his defence of the Bridge at Arnhem.

By an odd coincidence, Jamie Dornan can also be currently seen in a film that ends with the two men who assassinated Reinhard Heydrich holding out in a Prague church.