Maggie Smith, Bill Nighy, Judi Dench and other nice people amble through a plot culled from a 1970s sitcom 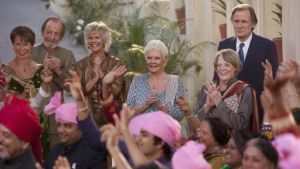 Well, they really are tempting fate with that title. Are they not? One half expects the poster to carry a tagline such as “will do well enough” or “if you’ve nothing better to do with your afternoon”.

Sure enough, The Second Best Marigold Hotel proves a shadow of its not terribly good predecessor. Only a monster could fail to perk up when seeing that cast list: Maggie Smith, Bill Nighy, Judi Dench, other nice people. If you have a cold coming on, just staring at the poster has the same effect as consuming unthreatening comfort food.

Unfortunately, the ramshackle selection of plots suggests nothing so much as one of those 1970s sitcom spin offs in which your favourite characters are all sent on holiday to the Costa del Cheapo. This impression is heightened by the awareness that one core storyline really does seem to have been culled from an actual 1970s sitcom

Young hotelier Sonny (Dev Patel), working with flinty old sauce Muriel Donnelly (Maggie Smith) has done such a good job running the titular establishment that he now feels able to expand. The film begins with the odd couple seeking funding from a US financier unthreatening enough to be played by David Strathairn. He seems vaguely interested, but he will need to send an inspector to check out the Marigold.

One day Richard Gere strolls into the hotel. Silly Sonny assumes he is the hotel inspector and begins fussing over him sycophantically, but we suspect the real mole may be relatively sprightly Tamsin Greig. Hang on! This is the Hotel Inspectors episode of Fawlty Towers with Gere playing the Bernard Cribbins role.

Anyway, it’s a ramshackle affair that, in its lazy assumption that we find old people doing business and falling in love remarkable in themselves, ends up being just a little patronising to its senior subjects. None of which is to pretend Marigold 2 doesn’t soothe like a warm compress. “You could do worse”: try that as a tagline.