Review: The star’s own performance is the main reason to give this movie a chance 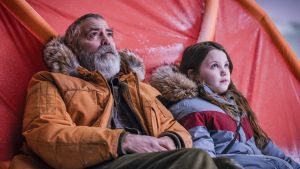 George Clooney and Caoilinn Springall in The Midnight Sky

Over two hours that drag like an unremarkable century, George Clooney’s latest ho-hum feature gives us many opportunities to ponder matters of great and little import. Might we find escape from our environmental carelessness in the wider cosmos? How could anybody bear the pressure of being the last human on earth? Who would have guessed that Clooney would age into ideal casting for a Mike Leigh biopic? Those sorts of things.

Not just grey of beard, but Leighesquely droopy round the eyes, Clooney stars as a scientist apparently left alone at the Arctic after a global catastrophe. Gravely ill, kept alive by transfusions, he potters about the facility while, out there among the meteors, colleagues on a space ship struggle to return home after an unsuccessful attempt to find sanctuary in the heavens.

Clooney’s slouched, unshowy performance is the main reason to give this expensive Netflix production a chance. The knowledge of his earlier, superhuman handsomeness – still much in evidence offset, it should be confirmed – adds poignancy to a turn that has something of Krapp’s Last Tape about it. The world (or what’s left of it) is all on his shoulders and he lets us know it.

No such stolid turn could, however, make up for the narrative torpor that surrounds him. Whether advertently or not, The Midnight Sky, adapted from a novel by Lily Brooks-Dalton, nods to a whole array of arthouse science fiction films. There is a little bit of Moon in Clooney’s solo perambulations and a good lump of Solaris (both the Tarkvosky version and the Steven Soderbergh remake starring Clooney himself) in his wistful recollections of a different earth. Peopled by a fine, under-stretched cast that includes Felicity Jones, David Oyelowo and Demián Bichir, the returning space ship shares some design specs with that in Silent Running.

None of those films was overburdened with plot. But each had a compelling visual aesthetic and a sustained emotional tone that kept the viewer hooked even when little was happening. It doesn’t help that nobody on the returning spacecraft has anything like a fleshed-out character. Why would you hire Jones and Oyelowo and give them so little to work with? It may seem appropriate that a space epic is short on atmosphere (sorry), but that pun doesn’t help sustain attention during the uninteresting crises and unsurprising traumas.

As is often the case when the portcullis to Castle Netflix is rolled up, the production values are all high: nice, varied score by Alexandre Desplat; neat cinematography by Martin Ruhe. But, for all the allusions to global catastrophe and existential trauma, one is left wondering why all these talented people wasted so much of the planet’s dwindling resources.

Streaming on Netflix from today