The lost tribe that is trying to save the world

More than 20 years ago, Alan Ereira made a film about an elusive Colombian people who changed how he saw the universe. A follow-up has an urgent warning for mankind 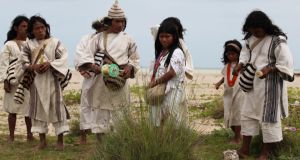 Above, the Kogi tribe of Colombia, who summoned film-maker Alan Ereira back more than 20 years after his first film about them 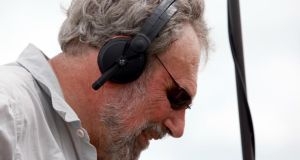 More than 20 years ago, the British documentary film maker Alan Ereira began researching a film about a lost city in the rainforests of Colombia’s Sierra Nevada de Santa Marta, the highest coastal mountain in the world.

In his book The Heart of the World, Ereira refers to the city’s location as a place “encouragingly known as hell because it was somewhat difficult to move through”.

The description is typical of the shrewd, laid-back charm he brings to the complexities involved in setting up, making and selling a film. In 1990s Colombia it took courage, chutzpah and experience as well as that charm to negotiate warring drug barons, labyrinthine government bureaucracy and a group of massively obstructive nuns. But in the end, the place known as hell proved to be the gateway to a Garden of Eden. And Ereira didn’t just find the lost city. He found a lost civilisation that changed his perception of the universe.

At an early stage in his project, Ereira heard that the Kogi tribe lived in the area of the lost city. Along with two other indigenous tribes, the Arhuaco and the Assario, the Kogi of the Sierra Nevada de Santa Marta are descendants of the ancient Tairona civilisation, which flourished in Colombia at the time of the Spanish invasion. They escaped destruction at that time by retreating high into the mountains.

Ereira set himself the difficult task of contacting their mamas or elders. The Kogi are elusive, and, at that time, getting to them required either a four-day hike or a helicopter ride through country controlled by guerillas. The best Ereira could do was to send them a series of messages that he hoped would get through.

A warning to the world
A year later, he received what was effectively a summons, sent by the mamas after grave deliberation. Their motivation was simple: they were afraid. The Kogi call themselves the “elder brothers” of the human race, and believe they are charged with the task of holding the health of the planet in balance. The world’s general population, which the Kogi refer to as the younger brothers, are precipitating a major ecological crisis that threatens the planet’s survival, evidenced by changes the Kogi have witnessed in their mountain environment. Ereira’s messages had arrived just as the tribe was considering how to send a warning to the rest of the world. Now they had their answer: Ereira must make them a film.

That film, also called The Heart of The World, and made for BBC television, became a global sensation. Its final image of an impassive Kogi sealing the bridge that leads to their mountain home symbolised their uncompromising message: “The younger brother is doing too much damage. He must see, and understand, and assume responsibility. Now we will have to work together. Otherwise, the world will die.”

More than 20 years later, The Heart of the World continues to be shown worldwide and its proceeds, along with those of Ereira’s book, fund the Tairona Heritage Trust, founded by Ereira and others to raise money for the purchase of the mamas’ ancient territories. The trust also co-operates with Gonavindua Tairona, a political organisation founded by mamas of the Sierra’s three tribes to represent their interests in the face of increasing western pressures.

Message unheeded
The film’s message went unheeded, however, and a few years ago, the Kogi summoned Eirera back and announced that they now understood that we’re incapable of being changed by being spoken to: we learn through our eyes, not our ears. They said a new film had to be made, this time by themselves, with Eirera’s production and distribution know-how, to draw its audience into their worldview and change our understanding of reality.

That film, Aluna, has been controlled by the Kogi themselves, from its conception, content and production to its final edit. (Weeks after the shoot finished, they insisted on reassembling the filming unit at the top of a mountain to shoot a differently nuanced closing sequence.) It is chilling, visually stunning, powerful in its use of metaphor, and surprisingly heartening.

Part of the film’s story follows a journey made by elders of the tribe who left the mountains of Sierra Nevada in Colombia for the first time and travelled to the UK to meet oceanographers and other scientists, who have subsequently sponsored Kogi involvement in international ecological conferences.

University of Oxford professor Alex Rogers, who appears in Aluna, attended its London premiere at Raindance Film Festival in September. Like the Kogi, he’s afraid. The combination of his work on human impacts on the ecology and the evolution of deep-sea ecosystems and his meetings with the mamas has convinced him that our continued interference with Earth’s water systems is crucially damaging.

Prof Jonathan Baillie, a global authority on the status and trends of threatened species, agrees; his work at the Zoological Society of London validates the mamas’ insistence on the interconnectedness of all life on Earth.

On Friday, the Blasket Centre in Dún Chaoin, at the end of the Dingle peninsula, will host the Irish premiere of Aluna. In one of the film’s most most powerful sequences, Richard Ellis, professor of astronomy at the California Institute of Technology, shows a Kogi mama a photo of deep space. It’s a huge image of thousands of white dots on a black background, seen through the Hubble Space Telescope and, so Ellis tells Ereira, invisible to the human eye. The mama considers the photo and then puts his finger on a single dot. “That one’s a star,” he says. That particular dot among the thousands of others is the only star in the photo: the rest are galaxies.

Hidden connections
The word “aluna” means “the mind”. The Kogi say that all things have a hidden connection, deriving from their common creation, which the mamas are trained to perceive and support. They speak of “working in aluna”, a process that Ereira describes as “the concentrated thought and memory which forms a bridge between the human spirit and the universe”.

The Kogi believe that aluna, which contains both memory and potential, is also a metaphysical world that governs the physical world’s fertility, and the mamas work to preserve that fertility, in the mind and on a more material level by, for example, performing ritual offerings at specific sites.

Many indigenous peoples worldwide share these two concepts, of an accessible spiritual dimension to the universe and of ritual payment for what is taken from the Earth. Within living memory here in Ireland, Blasket Island fishermen passing a rock that’s still known as An Seanduine (The Old Man) would throw a pinch of tobacco into the ocean, to invoke protection and as thanks for their catch.

Ereira, who will be at the Dún Chaoin centre for the premiere, reckons it’s the perfect venue. The people of the Gaeltacht retain a sense of communal memory and respect for oral tradition. For centuries their island and mainland communities lived with an awareness and understanding of their environment that was both practical and spiritual; and the traditions and customs of the past, though not necessarily still practised, are still passed on in a rich heritage of story, proverb and song. To Ereira, that heritage is important.

Although global distribution deals for cinema and television have been signed, the Kogi want worldwide, non-commercial screenings, initiated from within farming and fishing communities, and promoted online.

Ereira says it’s also important that fishermen and farmers, young and old, will be part of the Blasket Centre’s invited audience, and their voices should be listened to as carefully in the ensuing discussion as those of the environmentalists, politicians and policy-makers.

The Kogi are afraid, he repeats, but they’re also hopeful. Aluna contains both memory and potential. Potentially, we could still work together and get things right.