The Jungle book review: awe-inspiring retelling of the Kipling classic 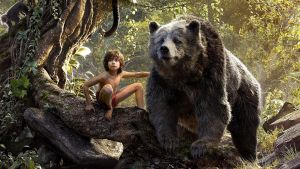 Bear essentials: Neel Sethi as Mowgli with Baloo (voiced by Bill Murray) in The Jungle Book

Though much admired now (and with cause), Disney’s The Jungle Book was, on its release in 1967, criticised for the relative crudity of its animation. It looked a less lavish project than the likes of Cinderella or Fantasia. No such accusation can be thrown at Jon Favreau’s sumptuous, and largely delightful, “live-action” take on the story.

We employ inverted commas because, the spirited contribution of Neel Sethi as Mowgli aside, this Jungle Book is every bit as artificially fabricated as the earlier film. It is beautifully real and absurdly unreal. The animals have a rippling weight that belies their formulation on a computer in downtown Los Angeles. The backgrounds are a little too clean to form anywhere outside an animator’s imagination. It looks like the work of a benign warlock.

Favreau is forced into certain compromises. The picture does look back to Rudyard Kipling’s source stories, but it is unmistakably an offshoot of its traditionally animated predecessor.

So, we begin with an allusion to the “water truce” – in the stories, but not the film – that finds the beasts of the jungle suspending hostilities. When Shere Khan the tiger (voiced by Idris Elba) threatens violence, Mowgli is dispatched to the man village with Bagheera the black panther (Ben Kingsley) and the new film finds some old rhythms.

You know all this. You will also know the tunes that are sometimes awkwardly – as if under contractual obligation – oiled into the sonic undergrowth. Bill Murray, voicing the perennially disgraceful Baloo, gets to do a characteristically laid-back version of the Bare Necessities. I Wan’na Be like You makes little sense when wrapped around King Louis re-imagined as an enormous Colonel Kurtz, but Christopher Walken voices the part with such slippery glee that no sane child or adult will care.

One senses the animators straining at self-imposed constraints. With no anthropomorphic facial expressions permitted, the animals often seem disembodied from their dialogue. The audience is asked to impose character on the beasts as they might on their own cat or dog. Only a cad could resist.

This is a gorgeous, sweeping entertainment that combines the epic – a rain-whipped ascent through muddy hills is particularly awe-inspiring – with the intimate and the offbeat.

Indeed, the film is so enjoyable that it seems mean to point out that the ending is a disgraceful cheat. Maybe they can get it right in the inevitable sequel. This Jungle Book is going to be huge.

Film-maker Pedro Costa: ‘There is no Beckett or Joyce in cinema’
Real news has value SUBSCRIBE