The fine art of being Bill Murray 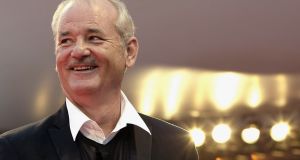 Nicholas Cage and Jim Carrey can try their best, but they’ll never trump Bill Murray for Hollywood quirk. As an important piece of cultural documentation (or glib early stocking filler), The Tao of Bill Murray (published by Penguin) is a new book that compiles his weird and wonderful antics. Due for release in September, it took author Gavin Edwards across the US as he met those who’d been “Murrayed”, a fate that’s equal but opposite to being “Beadled”.

Victims include the street sweeper whose vehicle was taken for a Father Ted-esque joyride by the star (“we just inched along like a tank on the street”) and a wrestler who was sent a semi-naked “Murray Christmas” card from the actor, even though they’d never met.

The new release isn’t the only work dedicated to his eccentric behaviour; The Big Bad Book of Bill Murray by Robert Schnakenberg also charted his unlikely run-ins with fans, and the Bill Murray story blog is crammed full of them too.

It’s not difficult to see why Bill Murray’s urban legends have gathered such traction. When even Jeremy Corbyn orchestrates events for the media’s benefit, we need the best of the bunch togatecrash engagement photoshoots, or steal chips because they’re there and he’s famous – a type of behaviour he displayed well before camera phones were invented. So if we didn’t already love him in Ghostbusters, Scrooged, Lost In Translation et al, we’d love him because he neither acquiesces to requests for autographs nor denies them, but signs foreheads as Miley Cyrus instead.

There are so many cases of these urban legends over the years that no one can accuse him of token behaviour, especially because it’s negatively affected his career. Firing his agent in favour of an unmanned 1800 phone line where directors leave pitches, which he rarely checks, have, according to Schnakenberg, led to him missing out on roles in Iron Man, Bad Santa, Monsters Inc and The People vs Larry Flynt. No bother; we get the impression that the one-man anecdote factory would rather have spent his time gatecrashing parties to do the washing-upanyway.

Why do so many Americans hate the welfare state?
10