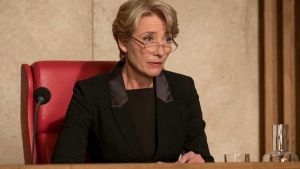 Can a committed, dignified performance save an otherwise painfully flawed project? On this evidence, the answer would be: “Erm, maybe, just about.”

Working with creased concern as only she can, Thompson plays a high-court judge faced with a moral quandary that the film-makers expect to send audiences squabbling from the cinemas. (Thompson said as much in a recent interview.) She carries herself like a judge. Her struggles between professional distance and humane concern play themselves out in every muscle. Like Ian McEwan’s source novel – adapted faithfully by the author – Richard Eyre’s film captures the backstage world of the bench convincingly: the Rich Tea biscuits, the soulless office corridors, the cringing deference.

Unfortunately the central dilemma will, for most viewers, not prove much of a dilemma at all. Like the recent, excellent Apostasy, The Children Act concerns itself with the Jehovah’s Witnesses’ prohibition on blood transfusions. McEwan has worked hard to skew his puzzle in the most uncertain direction. The minor in question is nearly 18. He is able to articulate his belief clearly. The parents support his decision, but remain sympathetically distraught. For all that, no even half-sane argument is offered for allowing a child to reject a life-saving medical procedure. The people at The Good Wife or Rumpole of the Bailey would struggle to get a TV episode out of this.

The writers of those series would know better than to call up the levels of absurdity that greet Judge Thommo here. My legal advisers are divided on whether a judge would be permitted to visit the bedside of a sick child, but I’ll overrule that objection on grounds of dramatic licence (and ignorance). Nothing can, however, excuse the scene in which, while hospital staff look on indulgently, judge and patient duet on Down by the Salley Gardens. Is this actually happening? Is somebody having a laugh? This is, perhaps, the most ludicrous sequence in any serious film released this year.

Anyway, the teenager, played with some unease by Fionn Whitehead, develops a crush on the judge and follows her to Newcastle. Elsewhere, in a sequence that triggers unavoidable reminders of her role in Love, Actually, Thommo accuses her husband (the inexplicably American Stanley Tucci) of adultery and arranges for his removal.

The film thinks itself very grown-up and, like many films that think themselves that, plays out its confrontations in the style of a middlebrow play. But it’s ultimately no less silly than the most recent Kevin James movie. After all, you don’t see Paul Blart singing Yeats with gravely ill religious zealots.

Still, Thompson does just about save the thing. Goddamn it.

Dylan Moran: ‘Smoking or breathing, one of them had to go’
5

Bad sex in the movies: from Top Gun to Fifty Shades
9

Pickbait: How to Argue with a Racist and How to Be a Fascist
10 Miracle warnings and a lack of bull
Real news has value SUBSCRIBE