The Babadook review: a horror movie for the ages 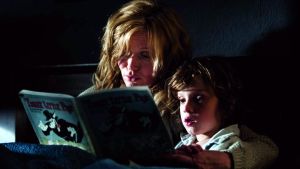 Essie Davis and Noah Wiseman in Jennifer Kent’s The Babadook

Many of the best horror films play upon fears and phobias we don’t like to admit to ourselves: associations between sex and death; suppressed prejudice; the looming threat of madness.

Here’s a case in point. Jennifer Kent’s excellent Australian film wades its way through paedophobic territory similar to that covered by David Lynch’s Eraserhead and Jaume Collet-Serra’s undervalued Orphan. There are all kinds of ancient terrors here, but the most unsettling concern a mother’s divided feelings for a difficult child. Her desperate, painful, protective love is constantly being challenged by irritation at her son’s abrasive neediness. The supernatural undercurrents are spooky, but the intimations of real-life traumas are still more disturbing.

The movie kicks off some seven years after Amelia (Essie Davis) lost her husband in a car crash. She was pregnant at the time and Oskar (Ben Winspear), her son, has grown into an intelligent, but temperamentally erratic young boy. Stressed by various fears, he has alienated various contemporaries and frustrated the teachers. The film lurches towards the supernatural (or does it?) when Oskar discovers a pop-up book entitled Mister Babadook in his room. Concerning a sooty creature with spiked fingers and a towering hat, the volume pretty much predicts what horrors are to come in last third of the picture. Unsurprisingly, the already nervy kid becomes completely freaked out and imagines the creature under every bed and within every wardrobe. His behaviour worsens. But the book will not allow itself to be thrown away.

Soon, obsession with the creature spreads to mom. She suspects that something is trying to break into the house, but, when she goes to the police station to complain, signs of the Babadook are there too. Amelia begins to fear that she may be driven to violence.

Winspear is very strong as the disturbed child – voice like truck brakes in need of lubrication – but the film belongs to Essie Davis. Ms Kent has coached a performance that, though hysterical in its later stages, always seems grounded in real fears and believable complications. At first, investigations by social services concern her more than the attentions of a mysterious imp.

The Babadook does eventually manifest itself, but it never loses its power as a metaphor for less fantastic menaces. Mind you, it is certainly an odd looking thing. There is something of those Czech animations from the post-war period that, though intended as anti-totalitarian allegories, ended up terrifying children in the run up to the evening news. There’s a queasiness, an unhealthy feeling, a dollop of the unheimlich to its fetid aura.

The most worrying sections of The Babadook focus on mother and child alone in an underfurnished, grey family house. Kent shot the film in Adelaide and, for non-Australian viewers, the odd combination of suburban conformity and Antipodean otherness adds to the creepiness. As in Roman Polanski’s Repulsion, ordinary household objects gain malignity as the isolation and claustrophobia sets to work on mother and son. The Babadook appears on television in the background of a Georges Méliès film and, with his stilted monochrome moves, reminds us of Nosferatu, The Golem and emanations from The Cabinet of Dr Caligari. (The presence of an early silent on broadcast TV is every bit as strange as any supernatural visitation.)

Easily the best horror film to make it into commercial cinemas this year, Kent’s piece is both aggressively original and impressively connected to tradition. It talks to genuine problems, but it happens in a universe as peculiar as the one that contained Hansel and Gretel. When is this taking place?

The technology lags and the fashions seem untethered. It’s everywhere and nowhere. It now and never. All of which will help make The Babadook a horror movie for the ages.