The Avatar sequels: Don’t bet against James Cameron as he sets release dates

The first Avatar broke records but left no cultural trace. Will its successors sink or soar? 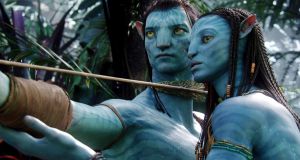 Avatars: Jake Sully and Neytiri in, at $2.8 billion, the highest-grossing film of all time

Who is the lead character in Avatar? Stop. Put your phone down. No cheating. If you answered “Jake Sully” then you have permission to read no more of this article (although you may still find some of it diverting). Can you name the lead character in Gone with the Wind? Of course you can. Who does Mark Hamill play in Star Wars? I’m insulting your intelligence.

James Cameron’s people have just confirmed that sequels to Avatar will start to emerge before Christmas of 2020. Another three will arrive at 12-month intervals. There has been some kerfuffle. There was some kerfuffle the last time CameronCorp talked about new episodes of Dances with Smurfs. (You remember that joke like it was 2010. Don’t you?) But the chatter is nowhere near as cacophonous as that which followed announcement of Star Wars’ disinterment in 2012.

Avatar was just a fun, slightly silly science-fiction romp that profited from the 3D craze at its height. Right?

Should this be a surprise? Star Wars is a global phenomenon of enormous reach and resonance. Avatar was just a fun, slightly silly science-fiction romp that profited from the 3D craze at its height. Right?

Let us again peruse the figures. Avatar is, by a near-inexplicable margin, the highest-grossing film of all time. Only three films have made more than $2 billion. Yet Avatar got more than two-thirds of the way to its third billion, with $2.8 billion. Cameron’s own Titanic trails in second, with $2.1 billion. When Star Wars: The Force Awakens opened, in 2015, a few ill-informed pundits suggested it might become the biggest film of all time. Third place was nothing to be sniffed at, but, with $2.07 billion, The Force Awakens got nowhere close. It is true that Avatar profited from inflated prices for 3-D. But the Star Wars film couldn’t get within $700 million despite trading at 2015 and 2016 ticket prices.

Apologies for all that accountancy. The lesson is as follows. Avatar is a phenomenon like no other. Yet its traces seem to have all but blown away. In 2014 Scott Mendelson, who writes about box-office figures for Forbes magazine, published an article under the headline: “Five years ago, Avatar grossed $2.7 billion but left no pop culture footprint.” Mendelson (a fan of the film, incidentally) argued: “Its overall effect on the culture at large is basically non-existent. It came, it crushed all long-term box office records, and it vanished almost without a trace.”

It is hard to argue with this. There was great enthusiasm at the time for advances in technology. The characters were largely created in a computer. The 3D was more imaginative than that in any other contemporary film. Audiences felt they were witnessing a revolution. But they don’t seem to have connected with the characters. More people will, at Halloween, dress up as Harley Quinn, from the supposedly catastrophic Suicide Squad, than the blue version of . . . What’s he called, again? Oh yeah, Jake Sully.

So there is every reason to suggest that the sequels to Avatar will play to empty theatres. The second film will arrive more than a decade after the first. If memories had, as Mendelson suggests, become vague in 2014, they will surely be obliterated by 2020. After all, unless Walt Disney changes its schedule – and why would it blink first? – the Avatar sequels will be released in the same months as successive Star Wars sequels.

Don’t jump to any such rash conclusions. James Cameron has a remarkable habit of frustrating negative expectations and giving the public what it wasn’t sure it wanted. It is easy to forget that, hugely overbudget and enormously delayed, Titanic was expected to annihilate Fox the way Heaven’s Gate annihilated United Artists. Yet great was the tinkling of cash registers. Only a fool would bet against Jimmy ruling the first Christmas of the new decade.

Still, a Twitter poll of this writer’s film-friendly followers found that only one in four could name the hero of Avatar. That’s science, that is.

The Movie Quiz: Maureen O’Hara was raised in which leafy Dublin suburb?
8