The Aftermath: Keira Knightley and co look gorgeous. That’s about it

Review: This is knitting-pattern cinema, completely lacking in emotional charge 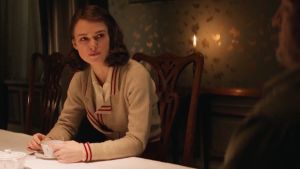 It’s about time we pinned down a term for the tastefully shot, emotionally inert 20th-century British drama exemplified by James Kent’s Testament of Youth and by his even better dressed, even more polite The Aftermath. Let’s go for knitting-pattern cinema. The absolutely gorgeous people in this adaptation of a bestselling Rhidian Brook novel – Keira Knightley and Alexander Skarsgård, most conspicuously – are forever wearing ochre cardies or lavender pullies while standing severely before complementary shades of mahogany. It’s not an altogether unpleasant vista. Franz Lustig’s cinematography is exquisite enough to do even those handsome people proud. Martin Phipps’s score swoops and pecks like a less abrasive Benjamin Britten. It’s a shame the film is so lacking in emotional charge.

We are essentially dealing with a continental, near contemporaneous Brief Encounter. It is late 1945. Rachael Morgan (Knightley) and her husband, Lewis (Jason Clarke), a colonel in the British army, have arrived in Hamburg as part of the occupying forces. They end up sharing a mansion with an emotionally damaged architect named Stefan (Skarsgård) and his equally troubled daughter.

The theme here is unfinished business. During the day, Lewis tries to facilitate an arrangement with citizens fighting for bread and accommodation. In the evening he fails to heal the emotional wounds suffered jointly with Rachael since the death of their child. Implausibly late in the story – remember the two families share a building – Rachael asks if Stefan’s wife is out for the afternoon and is told she also died in the war. The film offers little reason for the two to get together other than their mutual pulchritude, but before long they’re tearing off each other’s cardigans and exchanging Saxon fluids.

This is a professional operation from everyone concerned. No furniture is knocked over. Consonants are clipped with military efficiency. There is a scary turn from Martin Compson as a security officer and a charming one from our own Fionn O’Shea as Lewis’s driver. But there is never any sense of emotional activity beneath the well-polished surfaces. In Brief Encounter the passions bubbled so furiously that you half expected the characters’ facades to crack open and guts to spill on the station platform. Here the hard outside seems to conceal a harder inside.

Oh well. It really does look lovely. I’d snap up that V-neck in an instant.