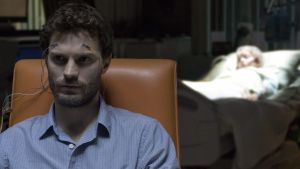 Nine-year-old Louis Drax (Aiden Longworth) has survived numerous near-death accidents - nine, in fact - when he comes into the care of a renowned neurologist Dr. Allan Pascal (Jamie Dornan, excellent). Louis has fallen off a cliff and is largely unresponsive. Could it be that he has found a way to psychically communicate with his doctor? Strange eerie dream sequences seem to suggest as much. Their feverish tone is amplified by Pascal’s romantic feelings for Louis’ vulnerable, porcelain-skinned mother (an otherworldly Sarah Gadon) and the film’s fragmented structure.

Unsurprisingly, the depths of Louis’ coma proves an unreliable narrator. His father (Aaron Paul), a former boxer with a secret past life, alternately appears as a dangerous aggressor and as a story-reading World’s Greatest Dad. His former therapist Dr. Perez (Oliver Platt) is a friend, then an enemy. And how did this sea-monster get here?

The script by Max Minghella - son of the late Oscar-winning director Anthony and star of such films as The Social Network and Horns - works hard to wrestle the material away from its literary origins. Yet persistent, necessary voiceover can’t help but alert us to the fact that this is an adaptation of a popular novel (Liz Jensen’s 2004 best-seller of the same name).

Director Alexandre Aja has previously displayed a knack with gore (Haute Tension) and with psychological thrills and spills (P2). Louis Drax marks an advance of the filmmaker’s most recent efforts - Horns, Piranha 3D - but the film’s pervading sense of dread doesn’t quite make for cohesion in a project that quickly shifts from whimsy to menace.

Sacred Weather by Niamh Campbell: a John McGahern study of verve and daring
10