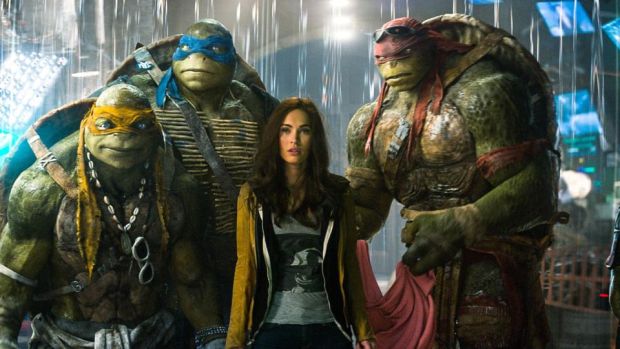 Has ever an idea this thin been stretched into such lengthy Mozzarella strings? (That’s a pizza reference for you there.)

Let’s not mess around. There is nothing worth knowing about the Teenage Mutant Ninja Turtles that is not contained in the four words that form the title. True, the original comic books were very well carried off, but the succeeding cartoons, videogames and movies showed the entertainment industry at its cynical pocket-picking worst.

Well, there was lower to sink. Michael Bay’s Teenage Mutant Ninja Turtles sounds like a concept dreamt up on an internet notice board during the trashing of the latest superhero idiocy. “Ha, ha! I’d rather go and c Michael Bay’s TMNT than sit through this again lol!”

You may well “laugh out loud,” sir. Bay has, indeed, ascended from the underworld to spread this infernal fertiliser about the cinema. Jonathan Liebesman, recently responsible for Wrath of the Titans, gets the director’s credit, but everything about it reeks of Bay’s brimstone aesthetics.

Essentially, this is a Transformers film with unamusing amphibians in the place of giant city-crushing robots. Megan Fox turns up as the journalist who discovers the creatures – still fond of a certain proprietary pizza – living beneath the cellars and becomes their connection with the outer world. Whoopi Goldberg is her boss. Most everybody else is generated by computer.

The trashy fun of the earlier incarnations has been ditched for the exhausting bland sheen of Bay’s less family-friendly entertainments. The result is a shockingly boring, endlessly unimaginative advertisement for pizza, soft drinks and the capitalist ideal.

Oh, well. They have done a good job creating the freakishly pronounced features on those artificially generated faces. But enough about Fox. Ha ha!