in Sarah Gavron worthwhile drama, the hard, brave campaign for women’s rights is given the soft-centred treatment 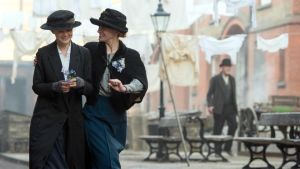 Daughters of the revolution: Carey Mulligan and Anne-Marie Duff in Suffragette

This overdue drama set amid the British women’s suffrage movement reminds us how far outside mainstream values the more radical campaigners were forced to tread. It is such a shame that Sarah Gavron’s well-appointed film ends up in such bourgeois heritage territory. Nobody is likely to confuse Suffragette with The Battle of Algiers.

When another colleague falls ill, she presents evidence to a cabinet committee lead by David Lloyd-George. Personal and political betrayals eventually propel Maud into the more militant wing of the movement.

Though the accent unaccountably becomes more middle class as the character becomes more socially aware, Mulligan does a good job of breathing life into a creation that often seems little more than a dramatised case study.

Awash with 'types'
Sadly, the film is awash with such “types”. Ben Whishaw plays Maud’s husband as a decent man forbidden from behaving decently. Brendan Gleeson is compelling as an Irish copper forced to talk us through the establishment’s argument. The revolting behaviour of Maud’s boss – a sexual abuser and shop-floor tyrant – is plausible, but his Dick Dastardly delivery is rather less so.

And, just when you had forgotten that she’s in it, Meryl Streep, playing Emmeline Pankhurst as a less abrasive Mrs Thatcher, is lowered theatrically into the action, so that the cast can beatify both actress and historical figure.

One could argue that Suffragette is the sort of worthwhile drama – politically unimpeachable, endlessly well dressed – that would play well on BBC1. But the film is nowhere near so incisive as the series Shoulder to Shoulder (1974), a study of the Pankhursts and their followers, that actually did screen on the BBC.

The sequences of force-feeding in prison feel perfunctory. Emily Wilding Davison’s famously tragic story is delivered as a brief footnote. Not quite good enough.