Star Trek loos and a third cinema for IFI 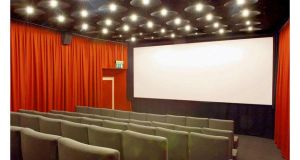 In the lap of luxury: the Irish Film Institute's new 61-seat cinema comes complete with a digital screen. Regulars will also see changes in the café bar and bookshop

Changes are afoot at the Irish Film Institute, as the much-loved venue in Dublin’s Temple Bar yesterday announced a dramatic upgrading of its facilities.

A cosy new cinema (the centre’s third) has been opened in the area where the old meeting room used to be. The bookshop, now expanded and featuring swanky fittings, has relocated to the corridor leading to Eustace Street. The Café Bar has been redesigned and boasts a menu featuring brunch dishes and (how modern!) tapas. Most importantly, the IFI now has a new loo with cool sinks and taps out of Star Trek.

Well, that’s all very nice, but what are the boffins going to do with their gorgeous new habitat? The scheme for 2010 includes a focus on new Irish films, starting with an exclusive release of Margaret Corkery’s rather nifty Eamon.

Institute regulars can enjoy treasures from the vaults in the upcoming Archive at Lunchtime programme. The Institute has also announced that it will be launching new “collaborations” with the Jameson Dublin International Film Festival, the Irish Museum of Modern Art and the Forum on Migration and Communications.

In the short term, the IFI will be screening seasons on French young gun Jacques Audriard, Japanese master Yasujiro Ozu and – it’s about time – the unfairly overlooked British crowd- pleaser Thorold Dickinson. Both that director’s Gaslight(1940) and The Queen of Spades(1949) will feature. www.irishfilm.ie