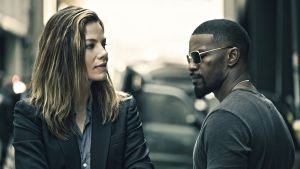 If they gave out Oscars for cheesiest tagline, then Sleepless could bank that baby like Viola Davis. “Never trust a cop by his cover” we are told. Because he’s a cop. And, like books, they have covers. Do you get it? Hang on. Isn’t that a massive spoiler? Don’t blame me. The studio felt it okay to point you in this direction.

Anyway, the film stars Jamie Foxx as a dirty cop in Las Vegas. We know he’s dirty because Internal Affairs keeps muttering the words “dirty cop” like a secular mantra. “Dirty cop, dirty cop, dirty cop,” she says to distract from consideration of her own squandered potential.

We know we are in Las Vegas because, at least once every five minutes, we get a sub-Michael Mann helicopter shot of the skyline to the accompaniment of menacing drones. The presence of Foxx – star of Mann’s Collateral – as Dirty Cop highlights those superficial comparisons, but that Mannish sense of gloss over grit is completing missing here.

Adapted from the French film Sleepless Night, Baran bo Odar’s empty entertainment has Detective Dirty Cop robbing one bunch of villains of their drugs and then discovering that the stash actually belongs to a more dangerous cabal headed by Dermot Mulroney. That crook is in hock to Scoot McNairy’s even more ruthless gang. One lot kidnaps Dirty Cop’s son and he is required to put much toothpaste back in the tube.

Sleepless has the puzzling, 95-minutes feel of a doomed project that has been mercilessly edited to digestible proportions. Hugely elaborate fight sequences (including one in a hotel kitchen that suggested Basil Fawlty assaulting Manuel) flit by so quickly and frequently one scarcely has time to register the victor. Vital plot points get lost in the mix. Minor characters suddenly take on jarring significance.

Still, there are worse things. Foxx has swagger. Michelle Monaghan makes a decent effort with another bad role. It’s an attractive, unpretentious sort of catastrophe.