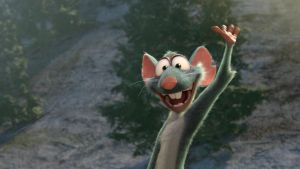 You wait an aeon for a film with a talking racoon and then two come along at once. It is not saying much to confirm that nobody of any age is likely to enjoy The Nut Job more than Guardians of the Galaxy.

What are you people up to? The good name of Canadian-South Korean animated co-productions has been sullied forever. Last week’s Belgian job about the marmalade cat seems like Fantasia by comparison. Kids deserve better. Heck, convicted fraudsters deserve better than this.

Taking place in a version of post-war New York City, The Nut Job is, of all unlikely things, an anthropomorphic variation on Woody Allen’s Small Time Crooks. A gang of hoodlums have bought a nut store with a mind to tunnelling through to a neighbouring bank. But they haven’t reckoned on the cheeky animals from the park and their plans to make away with the shop’s delicious stock.

Will Arnett voices Surly, a free-spirited squirrel who, for reasons unnecessarily explained in the last reel, has been banished to a life beyond the park community. He falls in with a female squirrel given little more personality than most of the humans Katherine Heigl has played (for those are her tones). Liam Neeson voices the authoritarian racoon.

The animation is efficient without being in any way distinctive. The dialogue clanks along relentlessly, but never finds any unique rhythms of its own. The high moral tone sits uneasily in a product so ruthlessly focused on picking parents’ pockets while offering no worthwhile distractions to compensate for the crime.

One oddity is worth noting. No doubt keen to support his nation’s film industry, Psy has allowed his image to be used in the credit sequence scored to Gangnam Style. Young ones may already require a gloss on this forgotten pop-cultural phenomenon from an earlier era.

Melania Trump: ‘A sphinx with a rubber eraser in place of a tail’
5