Guillermo del Toro's flamboyant fanboy salute to Japanese Godzilla movies is exhilarating for a while, but the non-stop bombast finally exhausts 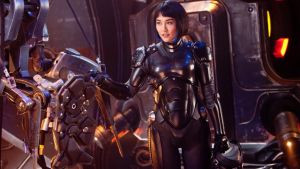 This never sounded like a great idea. The giant “Mecha” that populate Japanese horror cinema and the equally giant monsters with whom they often squabble were, for all their mighty powers, going to have to work very hard to avoid being crushed by the unyielding demands of American popular cinema. Still, if we must have such things, then Guillermo del Toro may as well direct them.

After wasting three years of his life not making The Hobbit (he returned from New Zealand when creative differences set in), the director of Pan’s Labyrinth and Hellboy has decided to take his anger out on the Southeast Asian coastline, various blameless cities and the eardrums of his patient audience.

Pacific Rim is a lot better than we had a right to expect. The script is laced with del Toro’s characteristic off-beat humour: Ron Perlman is good as a black-market trader; two contrasting nerds worry in the bowels; the dialogue goes for amusingly bold mock-dramatic.

Still, by the close, the barrage of CGI becomes too busy for any human eye to comfortably process. Whose arm is that? What is that lizard doing to that robot? To make things more incomprehensible, del Toro sets large parts of the finale underwater. Thanks for that.

Anyway, the film works from a reasonably effective premise. Some sort of fissure to another world has allowed giant creatures – later revealed to be relatives of the dinosaurs – to stomp about the earth and lay waste to screaming metropolises. At first all is hell. Then scientists reverse the tide by designing a series of giant robots operated by two pilots in a sort of mind-meld. That works for a while. Then it doesn’t.

As we join the apocalypse, the robot project is on the point of cancellation. Good actors such as Idris Elba play along enthusiastically. Every move the wooden Charlie Hunnam makes comes across as an apology for not being Channing Tatum.

As adventures in mechanised mayhem go, the picture does, of course, crush the Transformers franchise into iron filings. We would expect nothing less from this director. But one still leaves the cinema confused as to why he wasted so much effort on something so enormously huge in its wispy thinness.