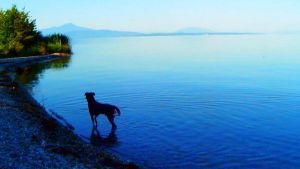 Anarchy reigned in the queues to access the main festival screening of the latest film from Jean-Luc Godard. In his Maoist days, the great director may or may not have approved. At any rate, the vague suggestions of his great film Weekend – hierarchies overcome by brawling – were amusing to contemplate while waiting for more obscure anarchies to break out on screen.

What had we fought to see? Well, aside from anything else, Godard has made the most striking use of 3D since that unlovely medium came back into vogue. Forget all that rubbish Pixar and James Cameron spout about being “subtle” and “immersive”. JLG turns up all the dials to 11, causing fruit bowls to float and seaside bollards to lunge sickeningly into the auditorium. In several extraordinary sequences – sure to become key in all future Godard studies – he offers us entirely different shots in either eye. Nothing in Avatar is quite so dumfounding (or headache-inducing). Meanwhile, grinding noises bounce far beyond the red and digital images are rendered in glaringly reversed colours.

Now 83, Godard still approaches cinema as a child might approach a billiard table. Cues are cast aside. The numerical values of the balls are ignored as they are propelled frantically about the table.

In recent years, the experiments have generated more tedium than excitement. But, though stranger than a horseradish doughnut, this funny, weirdly moving film really does get beneath the skin. As is the case with every recent Godard film, the story is hardly worth synopsising. A couple argue about love, sex, pubic hair and – in profoundly serious ways – the semiotics of “poop”. The director’s own dog dreams of tropical islands. Mary Shelly turns up to write Frankenstein.

Through it all the usual notions about power and politics show their talons. Jean-Luc has, essentially, been delivering the same visual monologue for 30 years. It has, however, just reached one of its most diverting episodes.