Pat Shortt: ‘There are mad f**kers out there’

In over 30 years in the entertainment business Pat Shortt has gone from town halls to the Cannes festival. Video: Music Entertainment/ Southern Comedy Theatre Production 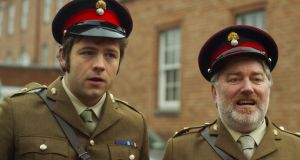 Pat Shortt (right) in The Flag: “This goes back to the older class of emigrant. We want to give that feeling of the guy down on his luck.” 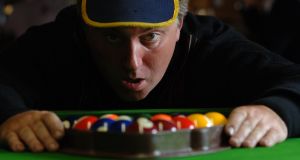 Pat Shortt in Lenny Abrahamson’s Garage: “When I got the script by Mark O’Halloran, I nearly shit myself. There were vast swathes with no dialogue.”

“As you can see, I am not pulling any faces. I’m not jumping around. There are no jazz hands,” Pat Shortt tells me.

It’s a lovely autumn afternoon, and we are tucked discretely in the corner of a hip south Dublin pub. The pride of Tipperary speaks in clean, sober sentences that permit only occasional detours into creative derangement. There is no reason to suspect Shortt would be otherwise, but some of his less well-adjusted fans do still expect him to perform on cue.

“You’d be surprised,” he says wearily. “I remember one incident when my child was only two. I brought the kids to Bunratty – as you do. This woman swung me round to her friends. ‘Look who I have here!’ With that, the kid punched her in the face. Sent her glasses flying. But what did she f**king expect?”

A class of invisible shield gathers around movie stars. Followers tend to approach with reverence and caution. Television (and what we used to call “video”) is a bit different. Having invited the hearty, warm characters Shortt played as part of D’Unbelievables into their living rooms, punters allow themselves to think they’ve made a friend.

“You’ll be in a restaurant with your wife and they’ll all start crowding your table,” he says. “They’ll say: ‘We’re up for a right bit of craic now.’ It can get utterly ridiculous. It’s the downside of playing likeable, ordinary characters.”

Since his time creating mayhem with D’Unbelievables, the comedy duo he formed with Jon Kenny in the late 1980s, Shortt has branched out into more nuanced roles. He was unsettlingly focused as the lonely protagonist of Lenny Abrahamson’s Garage. He has recently excelled as a farmer facing up to his wife’s terminal illness in Gerard Barrett’s Smalltown on TV3.

Still, the early madness still hangs around. His upcoming role in Declan Recks’s The Flag feels like a happy medium. Shortt plays an emigrant to London caught up in a scheme to recover an Irish flag that, following its capture at the GPO in 1916, now rests in a British army barracks.

“We are so used to the emigrant being the educated sort,” he says. “We’re used to the Skype generation. This goes back to the older class of emigrant. We want to give that feeling of the guy down on his luck. That was our generation: the writer Eugene O’Brien and myself. We can relate to that. As opposed to getting a flight, they get a ferry. Remember that.”

Shortt was not, however, among those who left the country as a young man. Raised in Thurles, one of 11 children, Pat had ambitions to be a musician and, like John Lennon before him, took the sideways route of attending art school. It was while at Limerick College of Art that he met up with Jon Kenny and launched unexpectedly into comedy.

He nods in partial agreement when I suggest that fighting for attention in a family that size would make a performer of anybody.

“There were 12 kids. My dad married after my mum died and I had a stepsister,” he remembers. “When I went to art school I played saxophone. I was quite a shy performer, though. When I met up with Jon that was my introduction to acting, comedy and all that. We brought this madness into pubs. Rather than just standing up there on stage we went into the audiences. We burst through doors.”

It’s an unusual and encouraging story. Kenny had done a bit of comedy before, but Shortt still vaguely dreamed of becoming a musician. “I thought art college was just a great way of getting the grant,” he laughs. “Before I got a ‘proper job’ as a musician in a band.” Within a few years, their anarchic class of character-based comedy had become a national phenomenon.

The duo seemed to have no obvious comic predecessors. Vic Reeves and Bob Mortimer were perfecting a unique stream of Dadaist cabaret at the time, but D’Unbelievables were distinguished by their sheer Irishness. The spirit of the nation surged through their collective bloodstreams.

“We’d no real influences,” Shortt says. It was all to do with mad people that we’d met in rural Ireland. It was, as we used to say, ‘the acceptable level of madness’ in Ireland. You go down to Wexford or east Limerick. There are mad f**kers out there.”

In 2000, Jon Kenny was diagnosed with Hodgkin’s lymphoma. The news came as a great emotional blow to Shortt, but, while his pal was recovering, he had to shake himself and consider the future as a solo performer. His series Killinaskully, broadcast on RTÉ from 2003, carried on the traditions of D’Unbelievables and proved to be another smash.

There was a period in the early part of the century when the Irish economy seemed to be driven largely by sales of D’Unbelievables and Killinaskully videos. Pat Shortt became, for a moment, our own, less feminine version of Marianne or Britannia. He was how the nation liked to see itself: warm, gregarious, irrepressible.

Shortt’s role in Garage offered a fascinating swerve. He played a lonely garage worker with learning difficulties who gets misused by unkind locals. Abrahamson’s film, which played at the Directors Fortnight at Cannes, confirmed his potential as a serious actor.

“Lenny Abrahamson would have more insight,” he says. “He approached me and said that he wanted me, and only me, for the part. He said the part required ‘physicality’. I said yes. When I got the script by Mark O’Halloran, I nearly shit myself. There were vast swathes with no dialogue. Then I got what he meant about ‘physicality’. That’s scary.”

Shortt owned the part. He later went on to play opposite Daniel Radcliffe in a West End production of Martin McDonagh’s The Cripple of Inishmaan. I wonder if, coming to acting through an unconventional route, he is aware of differences between his technique and that of formally trained performers.

“I think I am more pragmatic than the thespian type,” he says. “In some ways I envy them. I can see the benefits of that, but there is an awful lot of wank attached to it. But they learnt in a week things it took me years to learn.”

That experience comes through in Smalltown. There must be awful resonances for Shortt in the piece. He lost his own mother to cervical cancer when he was just eight. The children are older in Barrett’s series, but the emotions must still have felt raw.

“My sister also died very young of cancer. It was around the time I was doing Garage. She was about the same age as my mum – about 43 or 44. It was weird making it from that point of view. Gerard makes these things very real. His research into it was very exact.”

Shortt now lives with his wife and children in the picturesque town of Castleconnell, a few miles northeast of Limerick. He is writing a new one-man show and preparing for a new film. The hustle and bustle of the millennial years now seems a long time ago. He looks forwards to “working and fishing”. There are worse ways to ease towards 50.

“I want to do quality work and to do less of it,” he says. “And enjoy my life. Enjoy my life.”

Keep that in mind if you spot him at Bunratty Castle.

The Flag opens on October 14th.

MAN ABOUT DOG (2004)
The presence of our man as a classic Shorttian operator helped Paddy Breathnach’s comedy become a smash in Ireland.

GARAGE (2007)
In his follow up to Adam & Paul, Lenny Abrahamson cast Shortt slightly against type as a quiet man misunderstood by the world. The performance won the Ifta for best actor.

LIFE’S A BREEZE (2013)
Lance Daly’s underrated comedy drags Shortt into an Ealing-style search for a mattress full of cash. Charming.

QUEEN AND COUNTRY (2014)
John Boorman’s first film in nearly a decade dealt touchingly with the director’s time in national service. Only one man could play the Irish chancer.

TWICE SHY (2016)
Shortt is charming as a caring dad in Tom Ryan’s delightful comedy concerning a couple travelling to England for an abortion. Deserves to be seen in cinemas.