My Cousin Rachel: We ain't saying she's a goldigger... 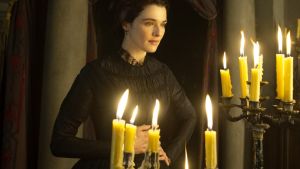 Rachel Weisz in My Cousin Rachel

One of many juicy moments in this agreeable adaptation of a popular Daphne du Maurier novel finds discussion of an Italo-English in-law turning to her rumoured “limitless appetites”.

A combination of titillation and revulsion colours the delivery of those syllables. As with the same author’s Rebecca, My Cousin Rachel has much to do with feminine menace. But it also enjoys playing with a sometime English suspicion of exoticism. Those complexes have lessened since the novel’s publication in 1951 and such scenes now add welcome comedy to an often-exhausting melodrama. Roger Michell’s adaptation doesn’t quite drift into self-parody, but there are laughs here if you know where to look.

The script fillets out much of the early epistolary narrative, but it still manages to tantalisingly delay the glamorous menace’s arrival. Sam Clafin plays Philip, a Cornish landowner who has been largely raised by his (unseen here) cousin Ambrose. The older cousin travels to Italy where he meets and falls in love with the bewitching Rachel (Rachel Weisz).

Ambrose’s letters home begin idyllically, but, following marriage and a decline in his health, he begins dropping hints that Rachel may have sinister intentions (as bloody foreigners always do). Ambrose dies. Philip fumes. Eventually Rachel turns up in England and, as his suspicions dilute, Philip starts plotting to hand her the estate.

The story hangs around an ambiguity as to Rachel’s intentions. Is she a manipulative gold digger or is she the victim of unsubstantiated rumour? The reliably charismatic Weisz wisely plays the role straight with no eye-rolling hints or giveaway twitches. Take her as she appears and she is surely nothing but an ornament to the world. Look sideways at the facts and she seems more like a classic femme fatale. Clafin’s relative youth makes his confusion all the more plausible.

Attractively shot on location with lovely supporting turns by Iain Glen (the wise elder) and Holliday Grainger (the usurped innocent), My Cousin Rachel has enough uneasy moments – the sex is notably imbalanced – to separate it from classy Sunday-night telly. It’s such a shame that it doesn’t end more satisfactorily. It builds and it builds. Then the walls too suddenly come crashing down.

Worthwhile for all that.