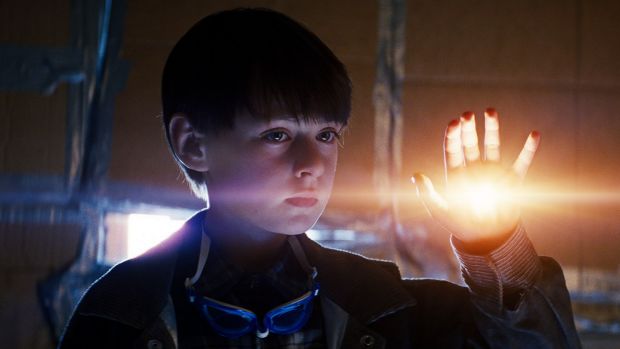 This may not be the first science-fiction film that Jeff Nichols has directed. Something awful was lurking over the horizon in the brilliant Take Shelter, but it was never clear exactly what class of disaster Chicken Little – in the charismatic form of Michael Shannon – had stubbornly foreseen.

The otherworldly is now to the fore in this effective, if uncertain, variation on early tunes by Spielberg. As in Close Encounters of the Third Kind, Midnight Special finds a man named Roy (Shannon again) fleeing the authorities as he races to make an appointment with the uncanny.

Satellites crash to earth. Super-powers are unleashed. But Nichols remains grounded in the same sort of character-based Dixie melodrama that fuelled such contemporary classics as Mud and Shotgun Stories. Midnight Special is still about the real world.

The police are pursuing Roy for abducting a young boy from a millennial cult. We soon learn that young Alton (Jaeden Lieberher), saddled with uncontrollable powers, is actually Roy’s son.

When his sunglasses are removed, his eyes release hugely destructive beams. He seems to pluck mathematical prophecies from the air. Lucas (Joel Edgerton), a former state trooper, has been persuaded to accompany the two on their journey to a meeting with obscure forces.

Led by an imposing Sam Shepard (in the sort of bad clothes worn only by Christians in liberal-skewed movies), the cult needs the boy to assist in their journeys towards celestial elevation. Like their counterparts in ET, the government forces are driven almost entirely by paranoid suspicion. They need the child because they can have the child.

Nichols’ film seems positioned in opposition to all organised authority. Shepard’s mob, the Third Heaven Ranch, is clearly barmy, but the state’s treatment of them – recalling the ATF’s heavy hand at Waco – borders on the totalitarian. Gesturing towards François Truffaut in Close Encounters, Adam Driver turns up as an scientist who may actually want to do the right thing.

Midnight Special is at its weakest when engaging directly with the fantastic. The ultimate “solution” to the boy’s mystery is perfunctory in its details and underwhelming in its CG execution. Though very well played by Lieberher, Alton has nothing to his personality aside from his extra-terrestrial strangeness.

When still open to enigma, the picture buzzes with a gothic disorder that is very much the director’s own. Shannon (who has appeared in all five of Nichols’ movies) has argued that the film-maker is interested in “a fellow who is thinking a lot, but he is not capable of expressing himself that well”.

Both Shannon and Edgerton – men whose eyes seem permanently scrunched against the sun – here find themselves engaging with mysteries to puzzle even the brightest boffin.

Mind you, this world is forbidding enough even without otherworldly children. Troopers lurk in cars. Kirsten Dunst plays the boy’s mother as a terminally confused soul. Adam Stone’s camera seeks out shadows in every corner.

The eventual release from oppression feels a little forced, but Midnight Special lays hooks that stay imbedded in anxious parts of the brain.

Boy George: The bits 'Who Do You Think You Are' didn't tell you about singer's Irish family

Dermot Bannon: ‘Every house needs three spaces – a head, a heart and a gut’