Jeff Nichols’s crusading love story bravely focuses on the domestic over the public, the personal over the political 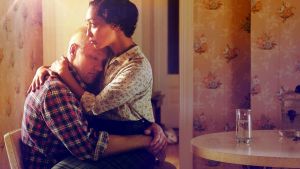 Let us first clarify what Loving is not. Following its premiere at Cannes, Jeff Nichols’s singular treatment of the case that helped dismantle the US’s anti-miscegenation laws was marked down as a certain awards contender. When the season finally came, it performed less well than hoped. By the time Ruth Negga secured her deserved Oscar nomination, she had been relegated to the status of outside bet.

Nichols has, perhaps, frustrated expectations by bravely focusing on the domestic over the public and the personal over the political. Loving concerns the relationship between a black woman and a white man in a small Virginia town. Following their marriage in 1958, the couple were arrested under the Racial Integrity Act and compelled to live outside the state for not less than 25 years. It was not until 1967 (the date beggars belief) that, with the assistance of the American Civil Liberties Union, they got their case before the US Supreme Court.

Loving is not a courtroom drama. The lawyers lurk in the background. The couple did not attend the final hearings and the camera stays with them throughout. If you require a clue as to Nichols’s approach, then digest the film’s title. It always seemed like an absurdly beautiful, nearly unbelievable accident that the couple at the story’s heart were called Mildred and Richard Loving (if this were fiction no writer would dare name them thus).

The film bears that title because it is about those two people. But the word also clarifies that the story has more to do with the business of being in love than the process of filing affidavits.

Negga (Limerick’s greatest export since Richard Harris), who plays Mildred, and Joel Edgerton, who plays Richard, are faced with significant challenges. The film’s argument is that these are two ordinary people placed in a situation that should never have been viewed as extraordinary. Their quiet determination was of a different character to the public resistance of Martin Luther King or Malcolm X (or even Rosa Parks). The actors’ job is to play people in love, not crusaders.

Neither performance can be faulted. Edgerton has the stubborn resilience of a man who just wants the world to leave him alone. It is, however, Negga’s performance that nudges the film towards transcendence. Her mellifluous voice sings the southern vowels with casual assurance. Her determined, furrowed face stands for a million women similarly mistreated.

Jeff Nichols, the southern laureate who directed Mud and Take Shelter, confirms his gift for place with swampy cinematography (his regular cameraman Adam Stone is back on board) and unhurried pacing (David Wingo’s swelling score secures the mood).

The story moves leisurely from Mildred’s pregnancy to the couple’s marriage to out-of-state exile without any panicky injections of contrived narrative tension. Mildred’s determination to fight her case emerges in dribs and drabs. She writes to Robert Kennedy. Eventually the ACLU turns up.

The almost wilful lack of plot swerves may unnerve some viewers. A few questions are asked without ever being fully answered. When Michael Shannon, playing Life photographer Grey Villet, arrives at the Loving home to take candid snaps, we half-expect tensions to emerge, but he does his job without causing any ructions.

The ultimate impression is of something unobtrusively radical. Nichols has dispensed with the creaky conventions of the “issue film” to focus on the cost of oppression and the rewards of resistance. We see some unkindness, but the picture does not have much to do with snarling rednecks. Perhaps Nichols’s greatest achievement is to make a convincing argument for the inherent decency of the human animal. That case is not made often enough.